Ah, Life Bread: Everybody who has spent time in this city will have come across it, and this is possibly Hong Kong’s most famous bread. These loaves wrapped in blue and white gingham-patterned paper with red lettering are well-loved because they are so distinctive-looking, and all Hongkongers seem to have memories of Life Bread being in their kitchens. It is The Garden Company that produces this ubiquitously Hong Kong loaf, so here’s a little interesting history about one of our city’s most well-known bakeries and confectionery makers. 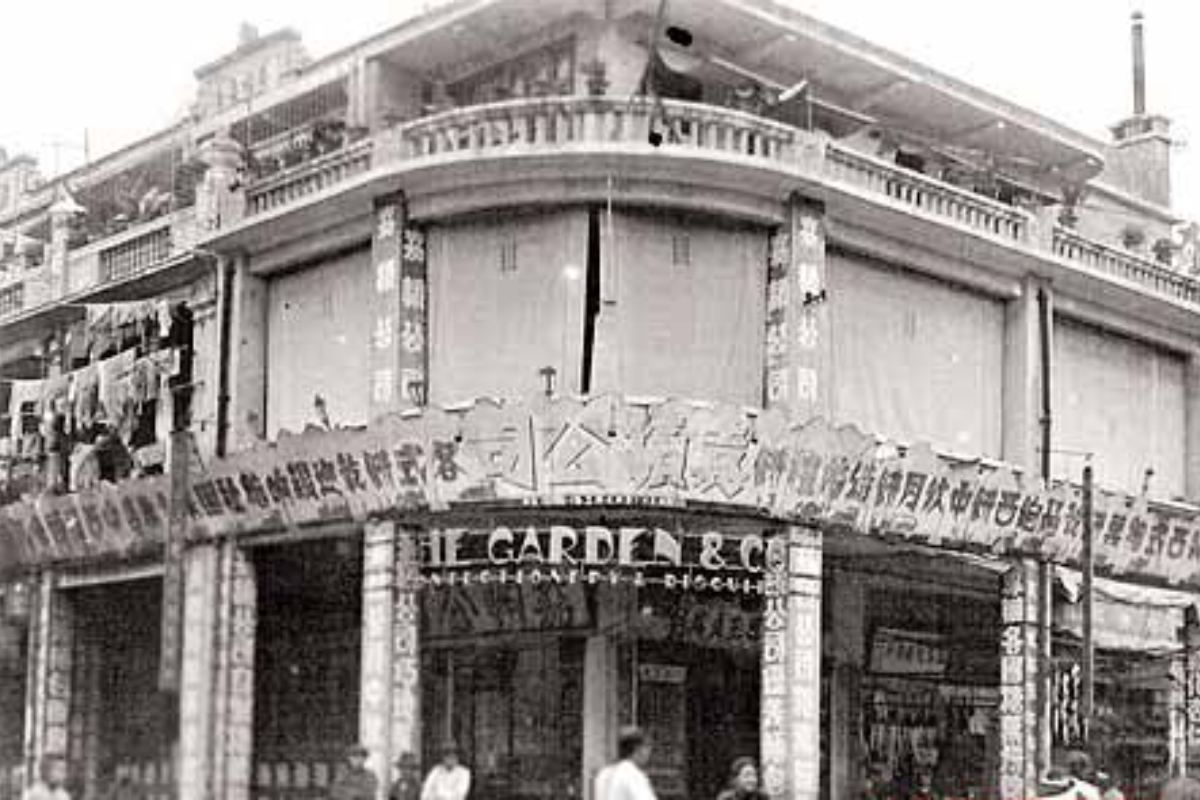 The Garden Company was founded in 1926 by Cheung Tse-fong and Wong Wah O, who had noticed the growing trend in interest and consumption of Western cakes and biscuits. The two men are cousins, and used to hang out together in the Hong Kong Botanical Gardens at night to discuss mutual plans of opening a bakery shop. This meeting venue was what inspired the name of the company they eventually established—its Chinese name is 嘉頓 (gaa1 deon2), a pronunciation of the word “garden” in a Cantonese accent.

Initially born as a single bakery, Garden made bread and biscuits out of a factory on Sham Shui Po’s Ap Liu Street, but had expanded to a retail branch in Central within a year. By 1931, they were based out of a rented, larger location spanning three floors, and operated round the clock, producing biscuits in the daytime, and bread and cakes at night. As one of the first Chinese-owned businesses to sell modern food products in Hong Kong, it is not at all a stretch to say that Garden played a huge part in making bread and confectionery affordable for Hongkongers who earned low incomes. Over the years, they have managed to maintain the production of fresh food items every day, except on three separate occasions. 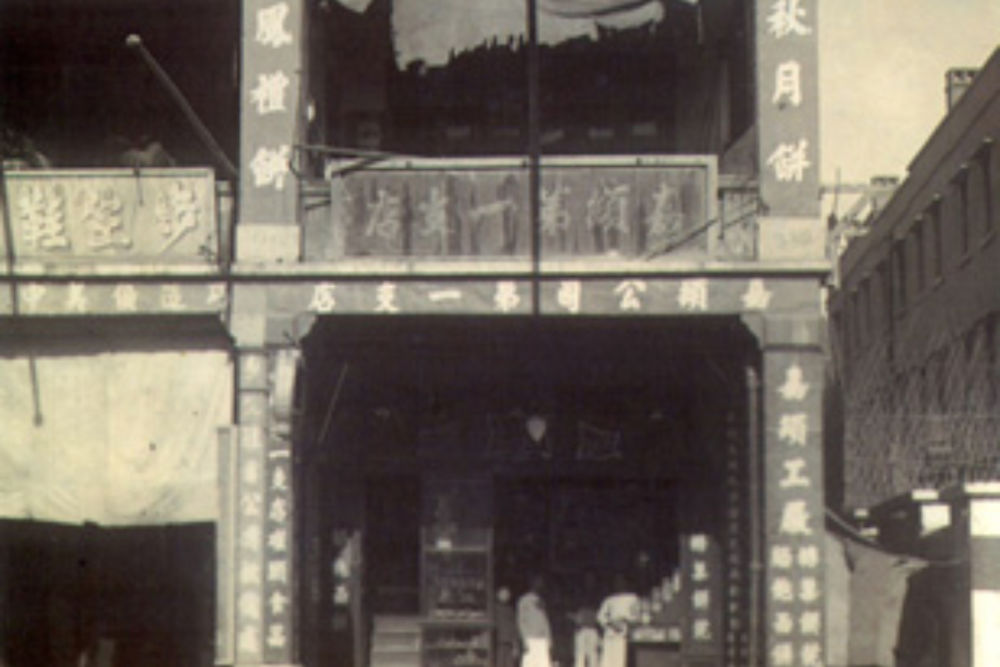 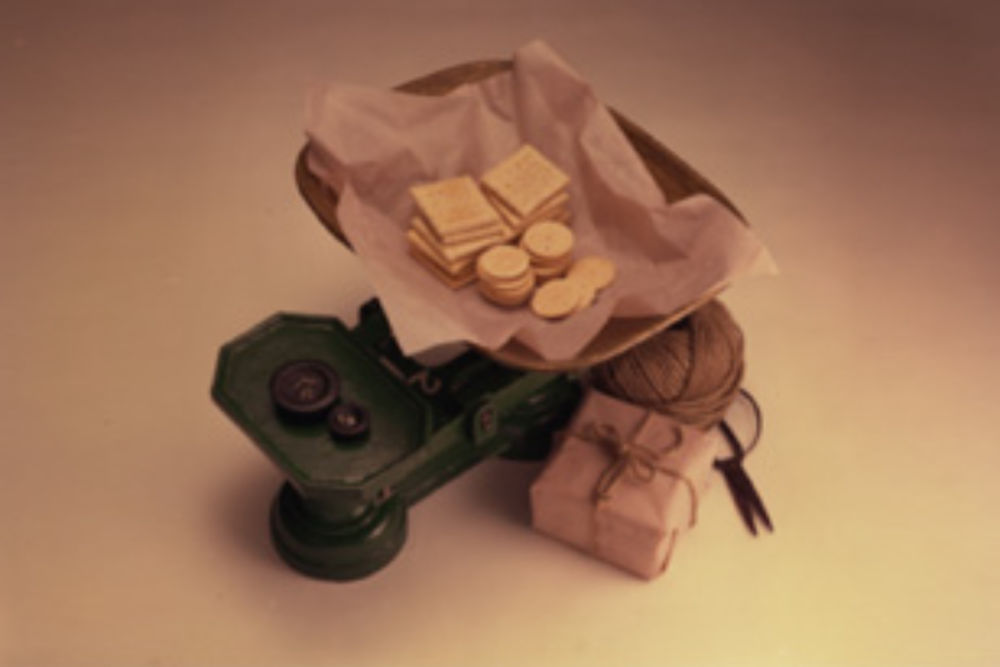 The first time a crisis halted Garden’s productions was in 1932, when a major fire broke out on the premises and destroyed the factory. What made matters worse was that an error in their insurance policy meant that the damages were a complete loss, and the factory had to shut for a few months.

However, it was around this time when The Garden Company broke a record in productions. During the Sino-Japanese War in 1937, they toiled at great speed round the clock to produce 200,000 pounds of Army Crackers over seven consecutive days, something which was considered impossible to achieve in those days. This feat was likely what won them a contract with the British government in Hong Kong, which appointed Garden Company as the major supplier of wartime baked goods for the army. 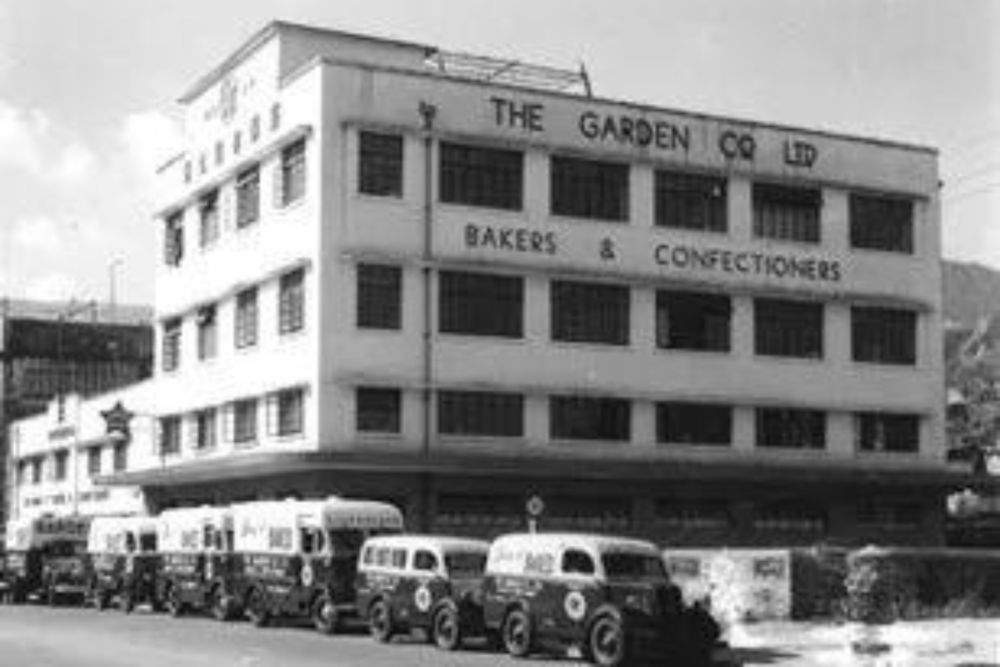 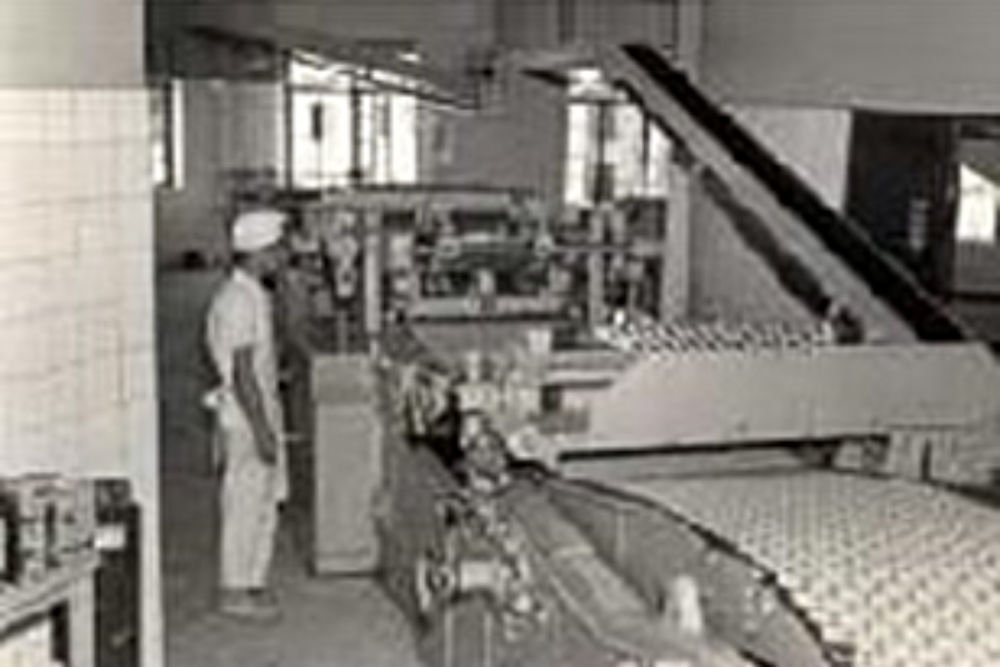 The second time they were forced to close was in 1941. After the fall of Hong Kong during World War Two, the factory which had already moved to more expansive premises on Castle Peak Road was commandeered by the Japanese troops. All facilities and production materials ended up destroyed, and Garden once again had to stop operations. As one of Hong Kong’s leading food enterprises, however, they very efficiently dusted themselves off at the end of the war in 1945, and business quickly resumed.

Cheung Tse-fong visited the UK for trade reasons in 1949, and was inspired to order the latest British-made machinery for automated biscuit production upon his return to Hong Kong. This of course allowed them to mass-produce biscuits in greater quantities and at greater speeds than ever, and by 1952, Garden was supplying Hong Kong’s army, navy, and airforce with bread and biscuits, and was the first bakery in Asia to mechanise such manufacturing processes, producing over 5,000 kilograms of biscuits per day. In 1954, automated production was also applied to their bakery and confectionery products. 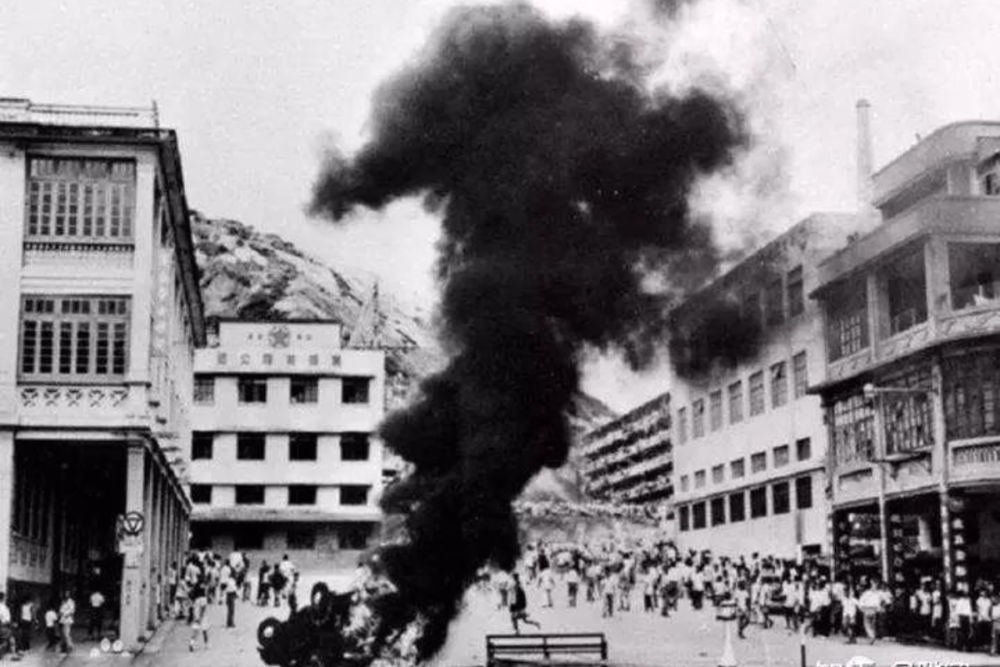 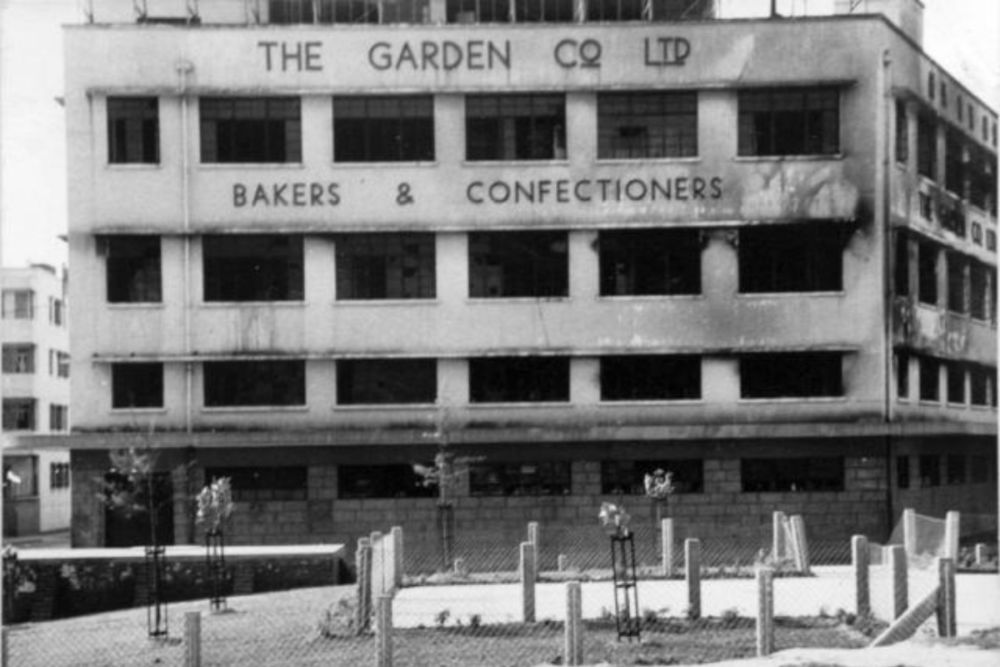 Garden bakery in the aftermath of the 1956 fire. Photo credit: moddsey (via Gwulo)

The third time Garden had to close its doors occurred when all their factory machinery were severely damaged during the October Riots of 1956, sparked by the demolishing of the Nationalist flag. But as before, they were quick to pick themselves up despite the losses and resumed operations in three months. Despite having their Castle Peak Road factory expanded to an area of 10,000 square metres across seven floors in 1958, the Garden Company grew so large that in 1962 they purchased a site in Sham Tseng measuring 13,000 square metres for a new biscuit and confectionery plant, which opened the next year. 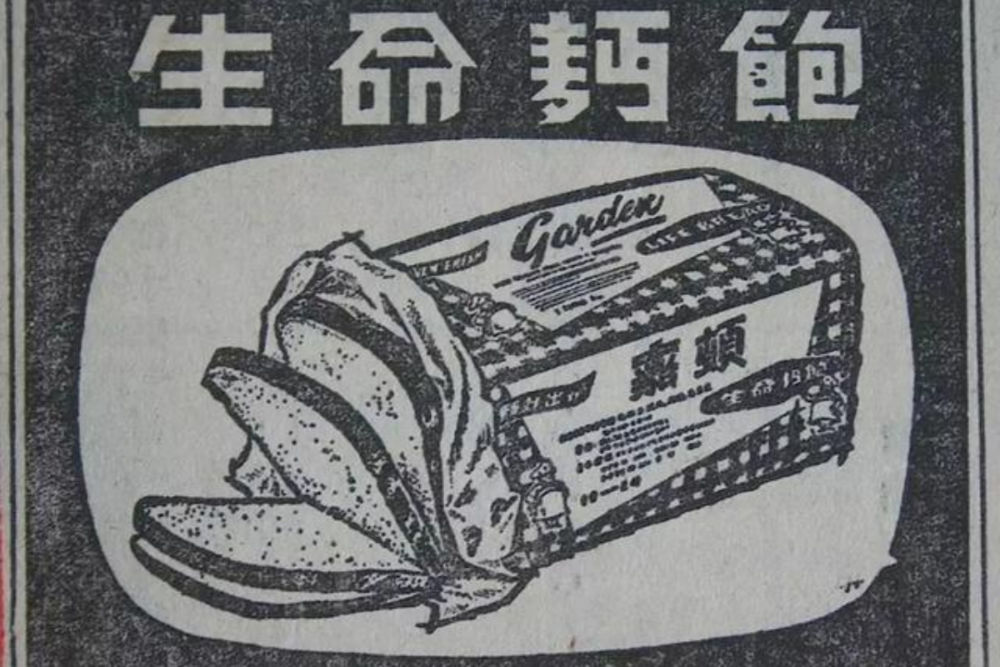 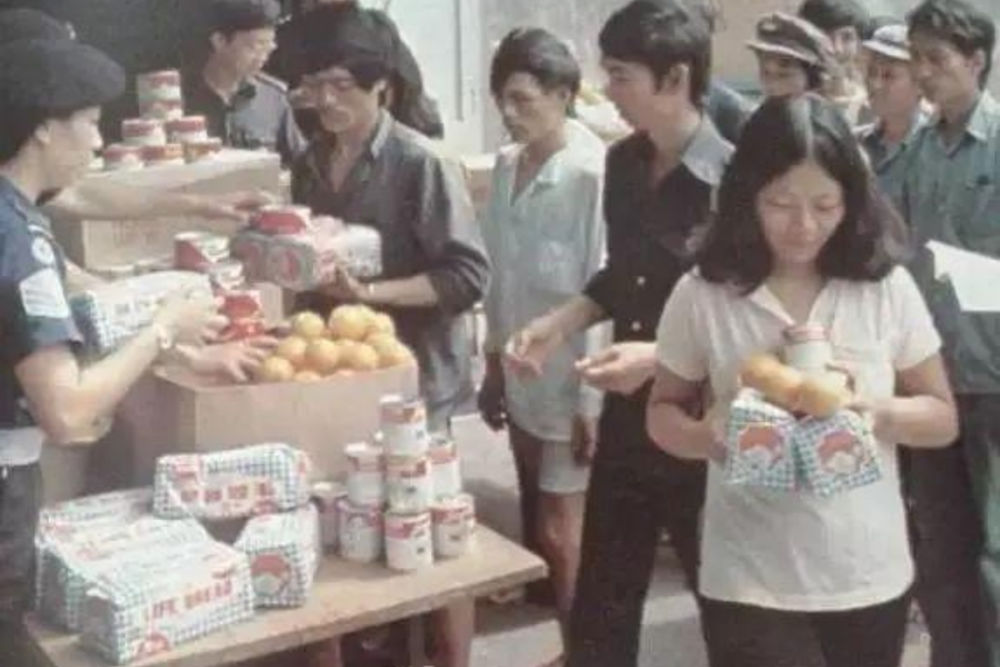 It was in 1970 when a modernised plant specifically for producing Life Bread was completed in Sham Tseng, and it quickly caught on with Hongkongers, going on to become one of Garden’s most recognisable signature products. They were also the first food company in Hong Kong to use waxed paper as their packaging—this helped to keep loaves of Life Bread fresh and protected them from external contamination. Up till this day, Life Bread can still be found packaged in its retro gingham-patterned wax paper, and perhaps as a nod to how iconic it is, Garden has not given their other products paper packaging, preferring to keep such wrapping exclusive to their Life Bread. 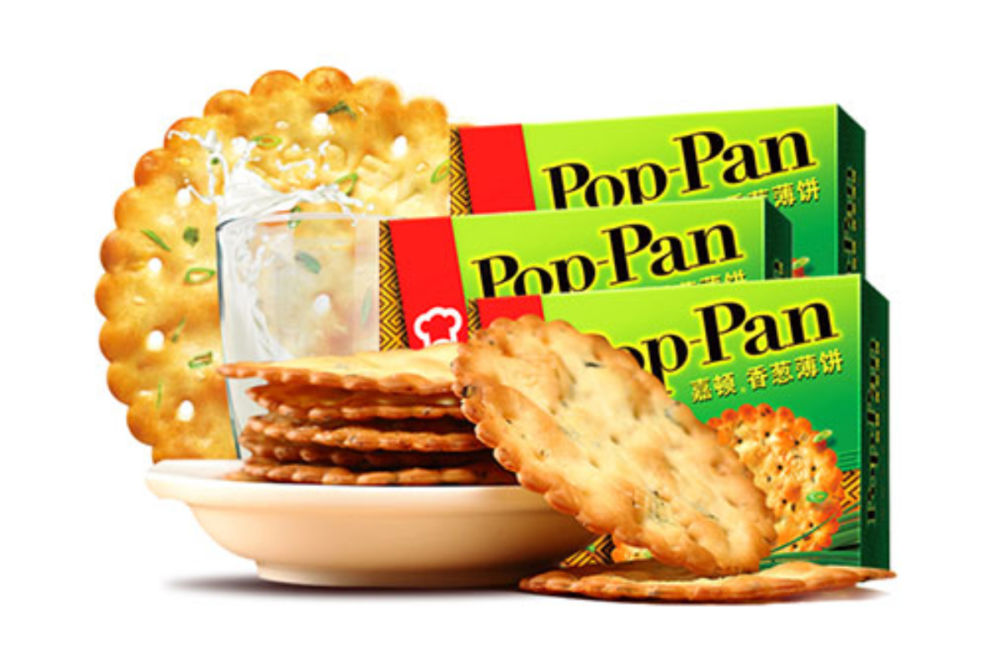 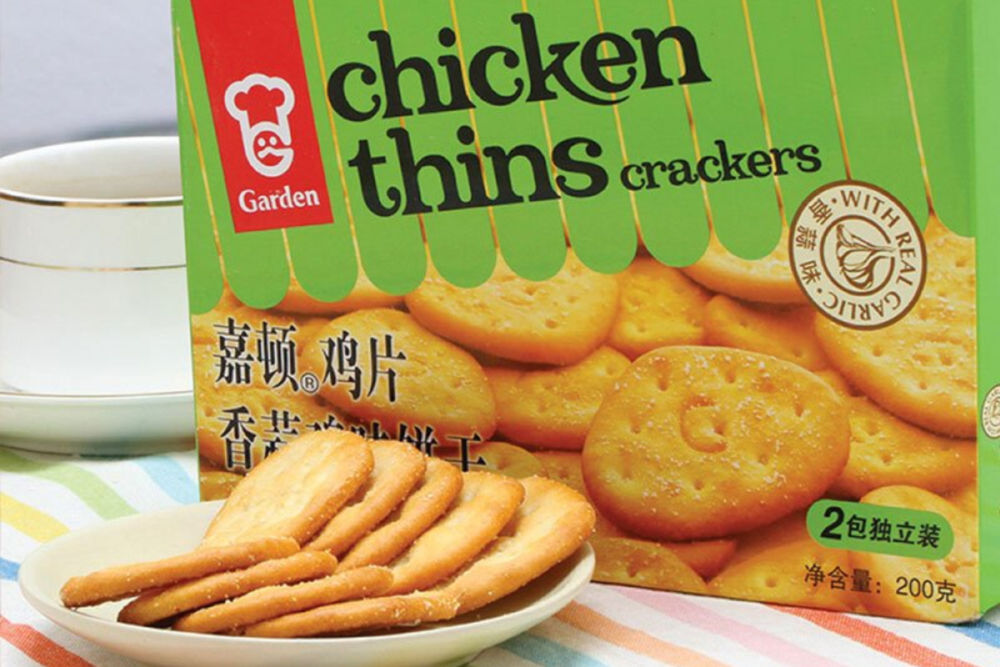 Garden also produces two of our favourite local snacks. The Pop Pan biscuit is a thin, green-speckled cracker that tastes like scallion pancakes (蔥油餅; cung1 jau4 beng2), but in biscuit form. In 1967, it won the gold medal at the International Monde Selection, which commends quality products, marking a first in the Hong Kong food industry. Another delicious snack is the Chicken Thin, a more crumbly, savoury biscuit dusted with a topping that tastes like chicken. A year after Pop Pan’s industry success, Chicken Thins bagged a Monde Selection silver medal for the Garden Company.

The Garden Company was also a pioneer in a few other respects. They were the first local food company to use four-colour printing on their promotional posters, and were also the first company to use tin cans to package mooncakes. Mooncakes in tin boxes are such a popular sight every year that Hongkongers have become rather immunised against finding it interesting, but it was in fact Garden which started the trend. In 1986, Garden was even invited by the Hong Kong Tourism Board to participate in the Hong Kong Food Festival, and produced the largest mooncake in Hong Kong history for the event, which was eventually donated to four charity organisations for the elderly.

Considering how big Garden had become, it should be no surprise that they were also the first Hong Kong-based bakery to break into the mainland Chinese market. Apart from shipping their products to Chinese communities across the world, Garden established Hua Jia Foodstuff in Guangdong as a joint venture in 1985, setting off a series of other joint ventures, building factories in Dongguan and Jiangsu, and extending their reach into mainland China’s market with offices expanding into Beijing, Shanghai, Shenzhen, and Guangzhou. Today, the Garden Company is still owed by the Cheung family, along with joint ventures with other Chinese firms. 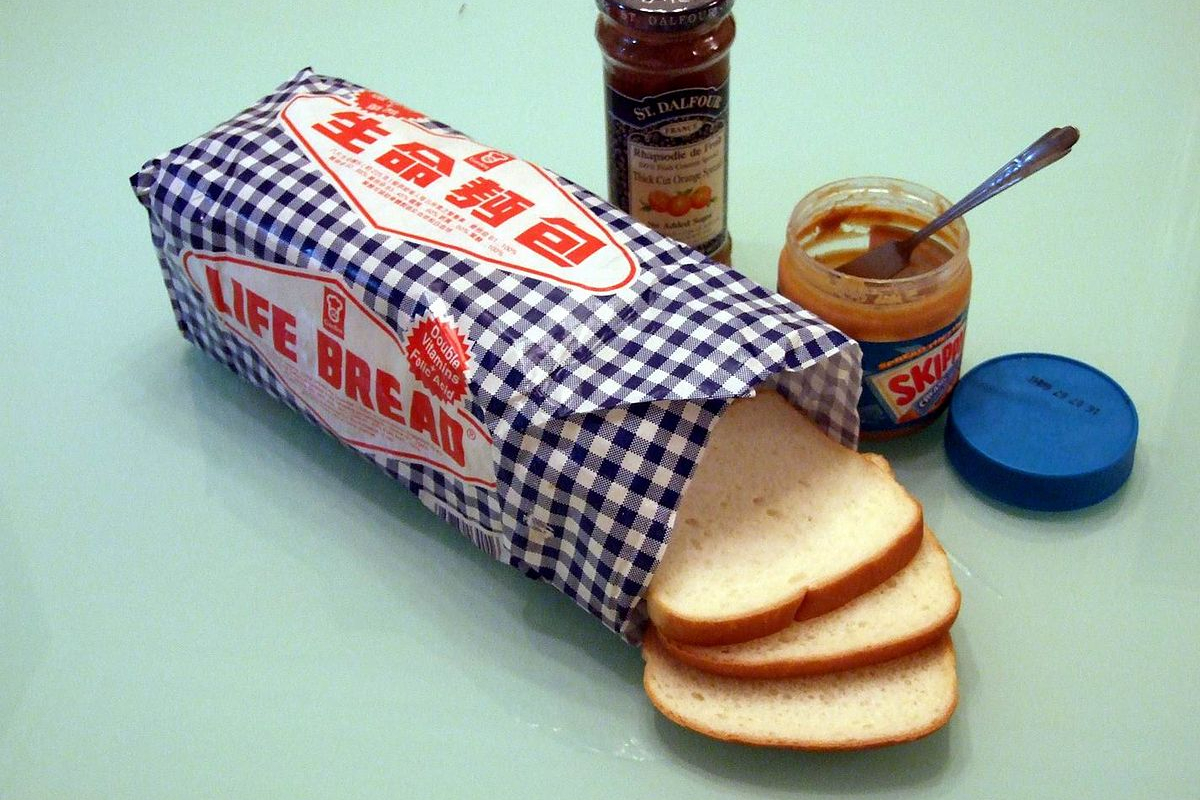 Garden in the present

The Garden Company has given Hong Kong some splendid staple foodstuffs and snacks over the years. Apart from the iconic Life Bread, locals will definitely be familiar with Garden Bakery cookies, which comes in huge red tin boxes. They always come family-sized and therefore are a popular gift to give and receive when visiting friends and relatives over Lunar New Year. Chinese mums are known to always keep these tins after the cookies are gone, to be repurposed into storage boxes around the house—if you happen to find such a Garden cookie tin in a local Hongkonger’s home, there may well be treats inside, or it could just as likely contain dried shiitake mushrooms, fruit peel, or even spools of thread and a sewing kit! 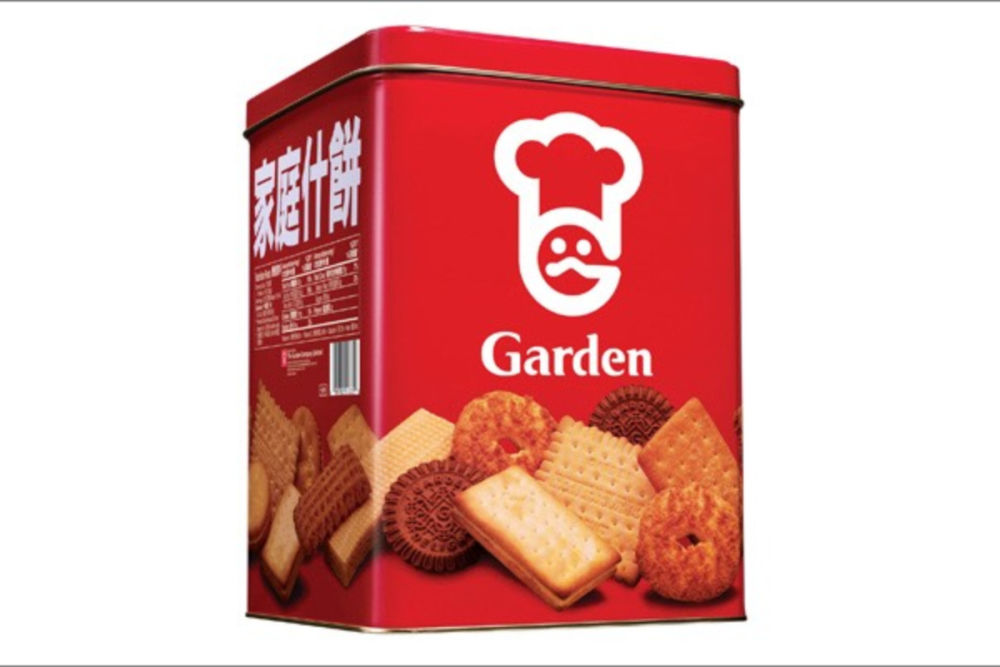 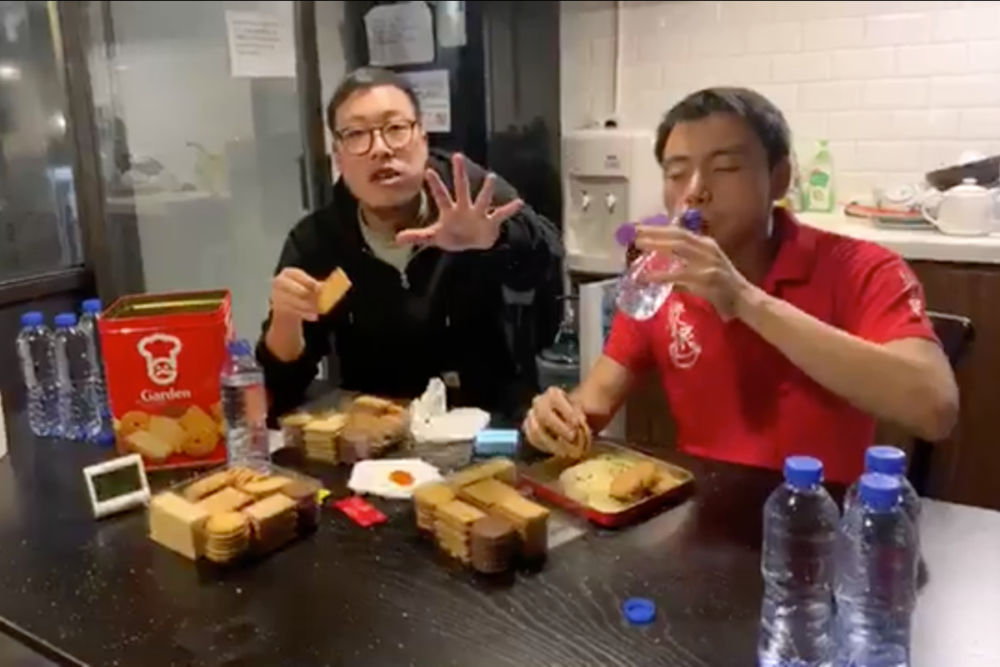 People often say that these Garden Bakery cookies come in such huge portions—the tin is approximately 30 centimetres deep, 20 centimetres long, and just as wide—that they never get finished before they have to be thrown out. In early 2019, Garden’s snacks unexpectedly came into the limelight when thousands of people watched a live stream of two Hong Kong men’s challenge to eat the entire tin of cookies in under half an hour. Spoiler: the guys finished all 176 of the biscuits in just under 26 minutes! They certainly challenged the common assumption that Garden biscuits are impossible to finish, and it just made us crave cookies as well. 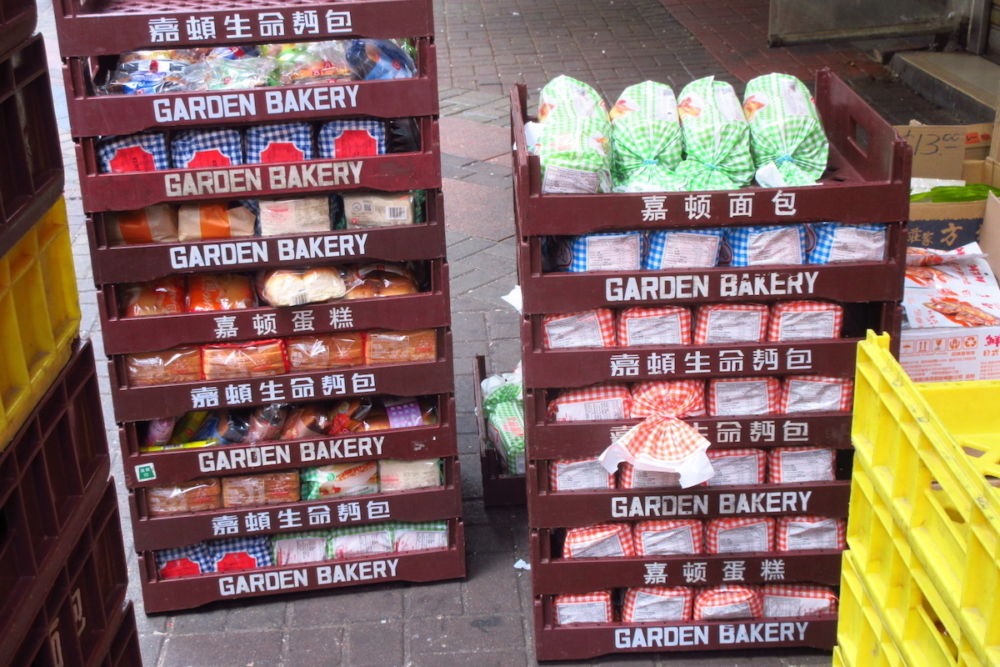 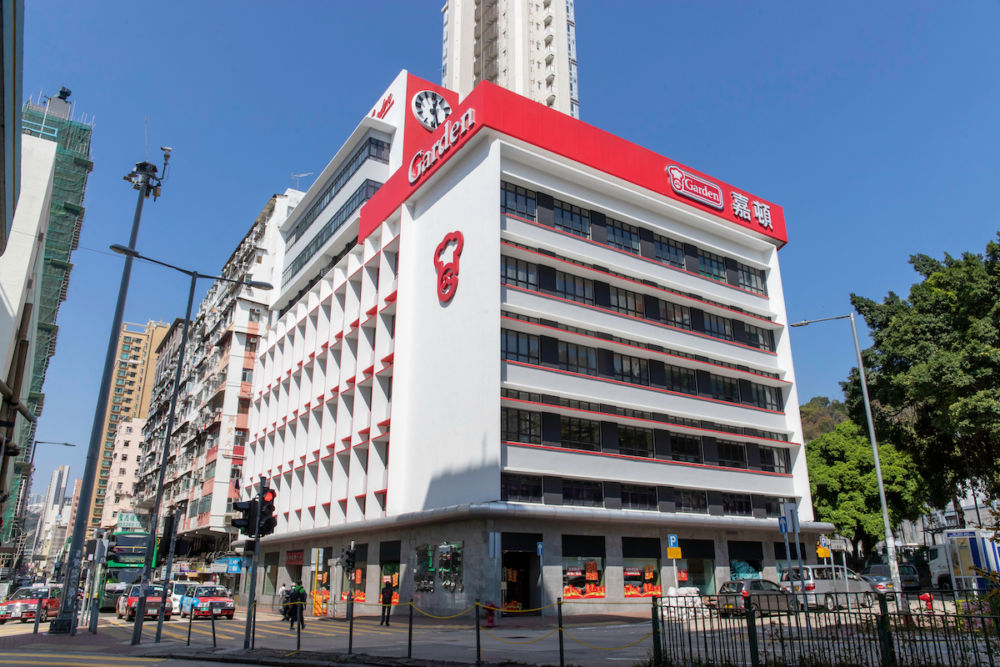 Today, a slice of the magic that happens in Garden can be experienced in person at their Sham Shui Po factory location. Aside from an exhibition area showcasing the history and milestones of the company (we particularly like seeing their old-school packaging from the past), there is also a café on the ground floor where visitors can try Garden-made goods such as muffins, sandwiches, and toasties, fresh from the oven. Life Bread and biscuits aside, we just find it heartwarming that the Garden Company is one of the last local companies which still operate out of premises in Hong Kong itself—now go out to buy a loaf of Life Bread, feel the pleasingly smooth crinkles of the packaging, and know that you’re holding a bit of bread that means a lot to Hong Kong! 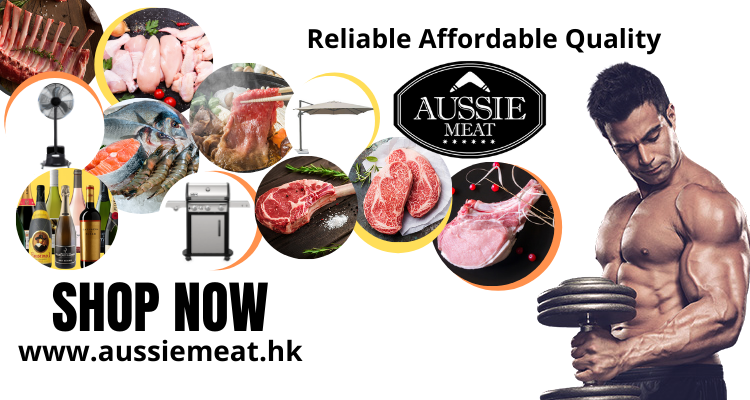 New Eats: Where to eat & drink in Hong Kong this May

New Eats: Where to eat & drink in Hong Kong this February