It’s easy to see that fancy, five-star hotels will provide you with the most luxurious accommodation experience, but new breeds of soul-trippers are increasingly searching for authenticity and connection while on their adventures. If you too are looking for an experience that gives your travels or staycations more depth instead of just lavishness for the sake of being lavish, then perhaps you’d be interested in ditching the regular pool and buffet combo for some of Hong Kong’s excellent heritage hotels and hostels, covering everything from high-end luxury to far-flung retreats. 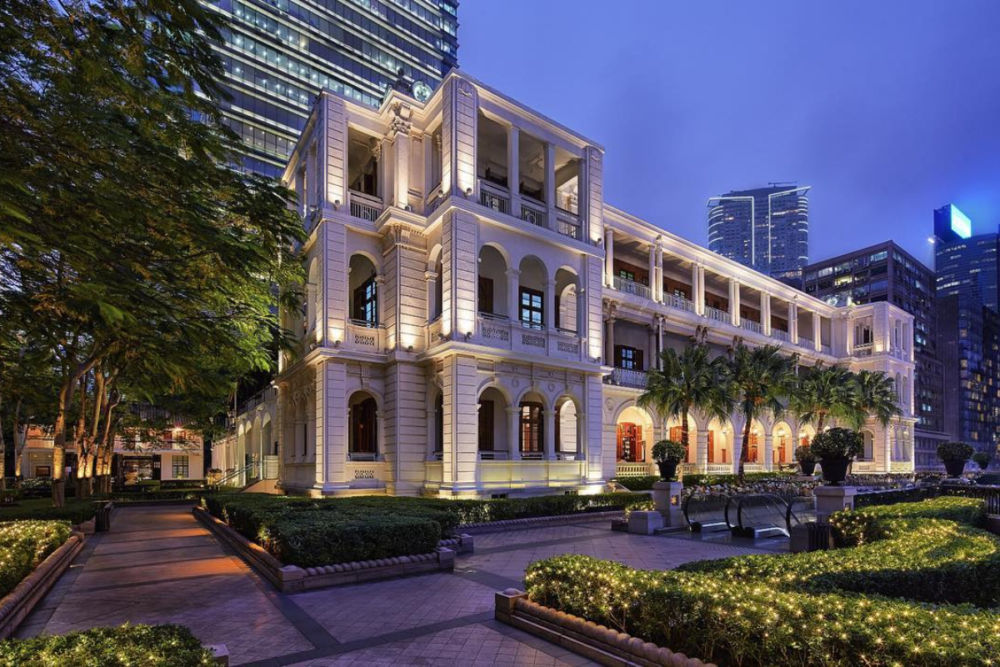 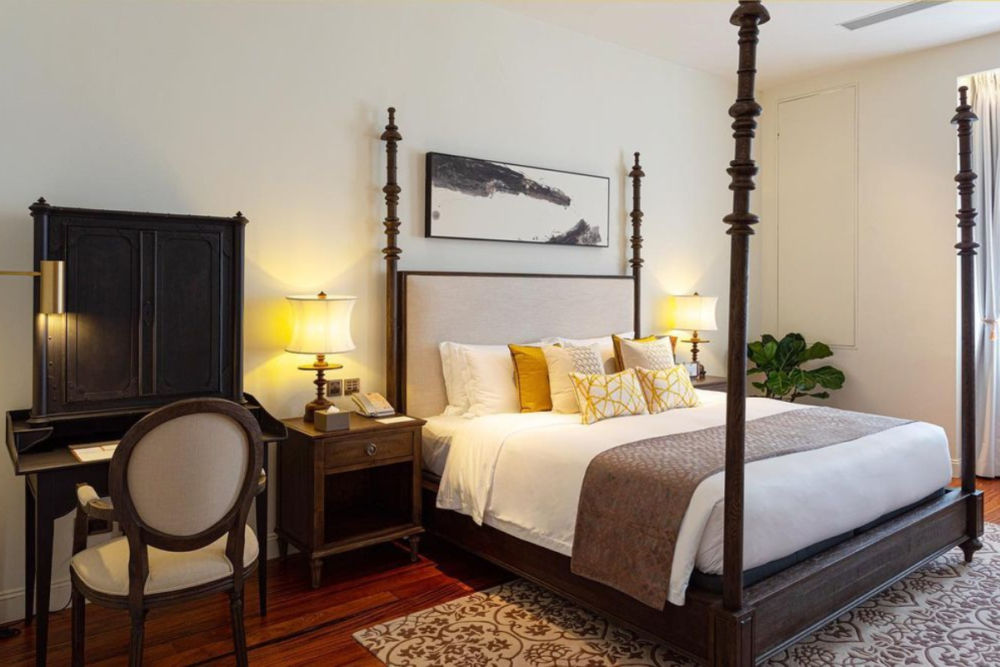 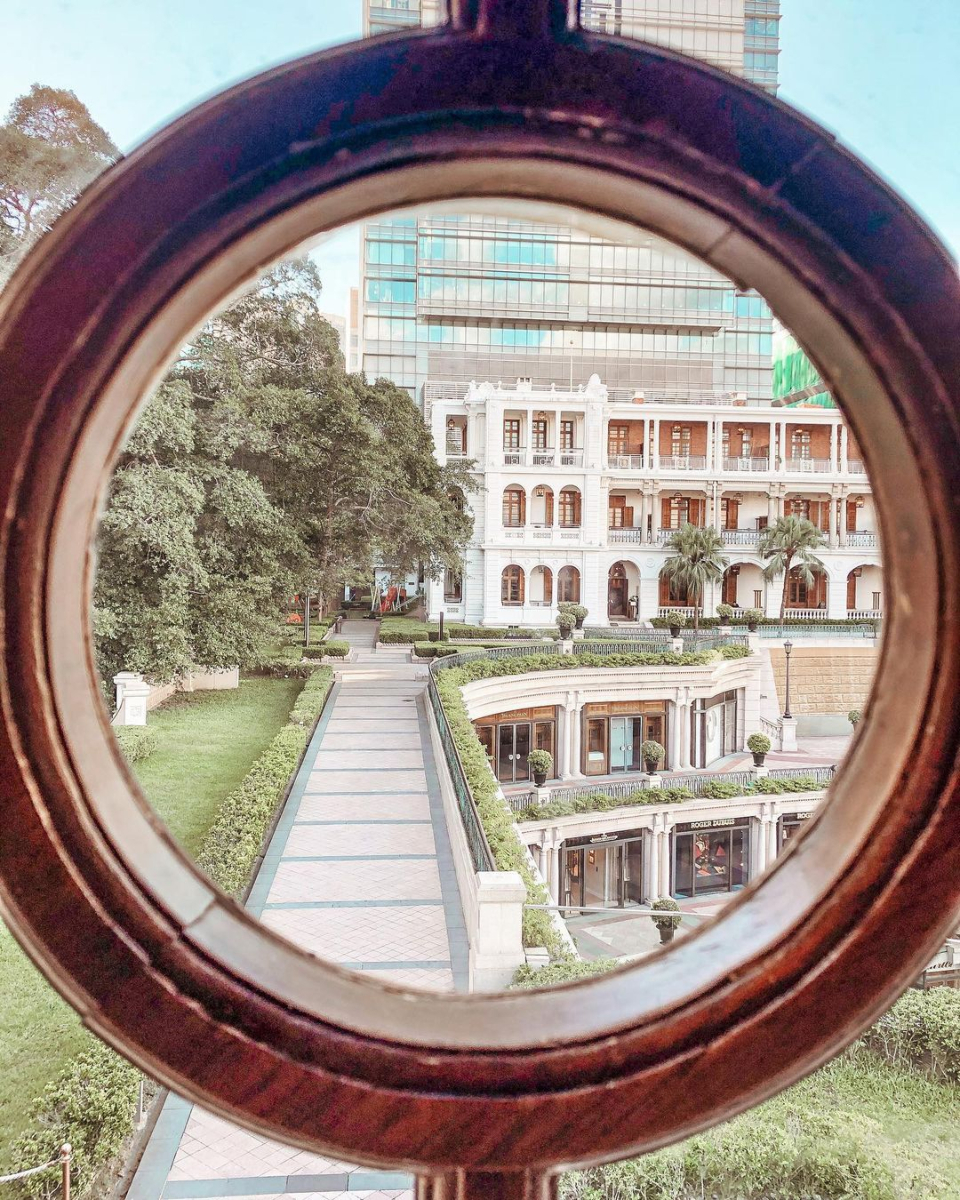 Everyone who has been along Canton Road in Tsim Sha Tsui will undoubtedly have seen this colonial structure with balustrades, arches, and waterfalls. It served as the Marine Police Headquarters Compound from 1884 to 1996 before the Marine Police moved to Sai Wan Ho, and is one of the four oldest surviving government buildings in Hong Kong. Along with the Old Kowloon Fire Station, the complex was revitalised and redeveloped into a cultural landmark in 2009 named 1881 Heritage.

Besides retail and food and beverage outlets, there is also a heritage hotel named FWD House 1881. In line with the buildings’ colonial style, the interiors of this boutique hotel exude an old Hong Kong charm, replete with burnished wood, four-poster beds, and gorgeous verandah balconies. Some interesting relics that have been preserved in their original state include old cast iron fireplaces, three holding cells, houses for carrier pigeons, and a bomb shelter underneath the site that is now the passageway leading to the Heritage Hall exhibition space. 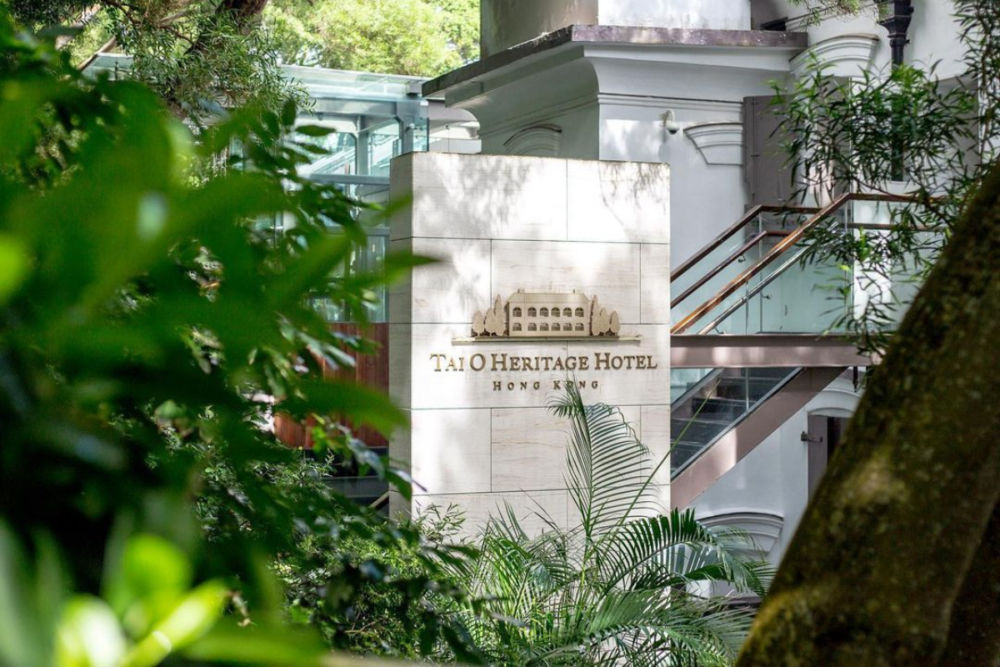 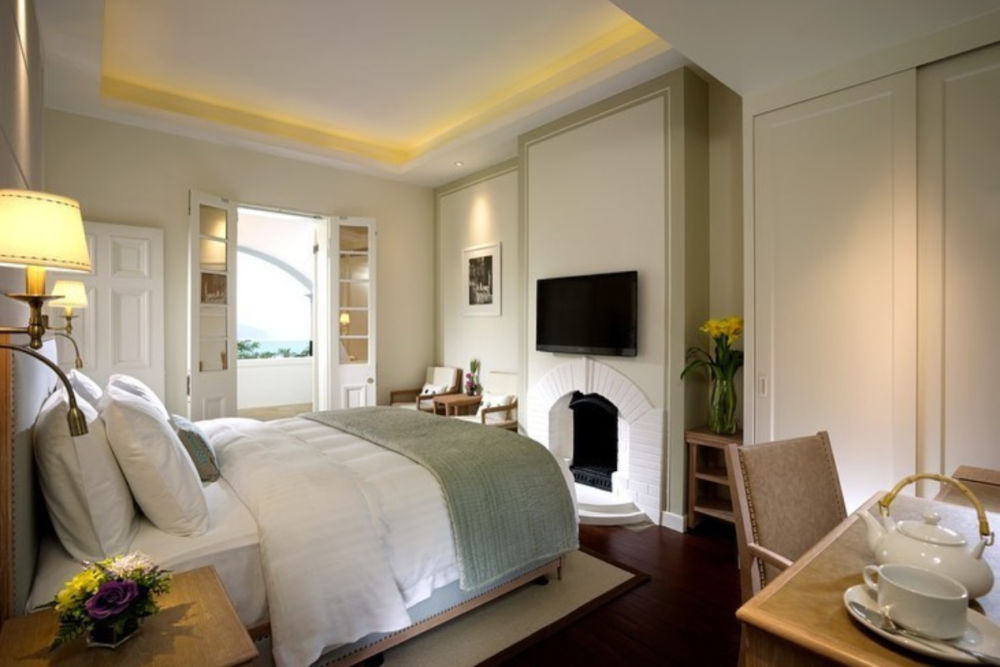 Tucked away in the far end of the fishing village of Tai O, which in itself is already on the far end of Hong Kong, there’s possibly no place better for a secluded getaway than the Tai O Heritage Hotel. Converted from the old Tai O Marine Police Station built in 1902, the hotel may only contain nine rooms in total, but is housed within a beautiful colonial architecture with modern tweaks. Its French windows, arched façades, fireplaces, and corner turrets are contrasted by local elements like the Chinese tiled roof, and overlook gorgeous views of the sea. Don’t forget to also visit Tai O Lookout, the glass-roofed restaurant where you must order the delectable deep-fried shrimp toast with salted egg yolk and pork chop bun with shrimp paste. 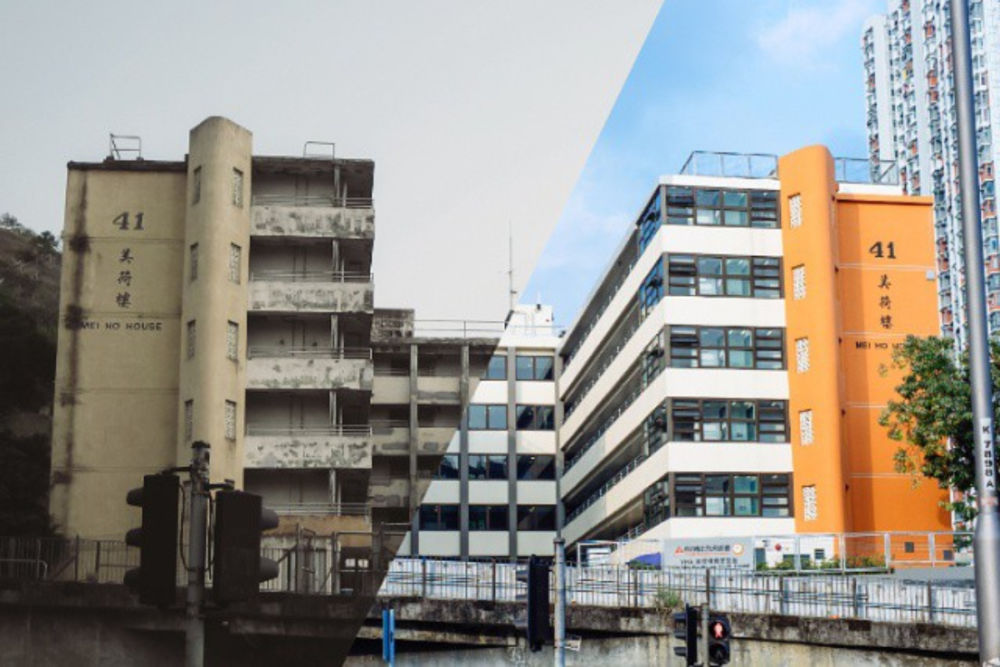 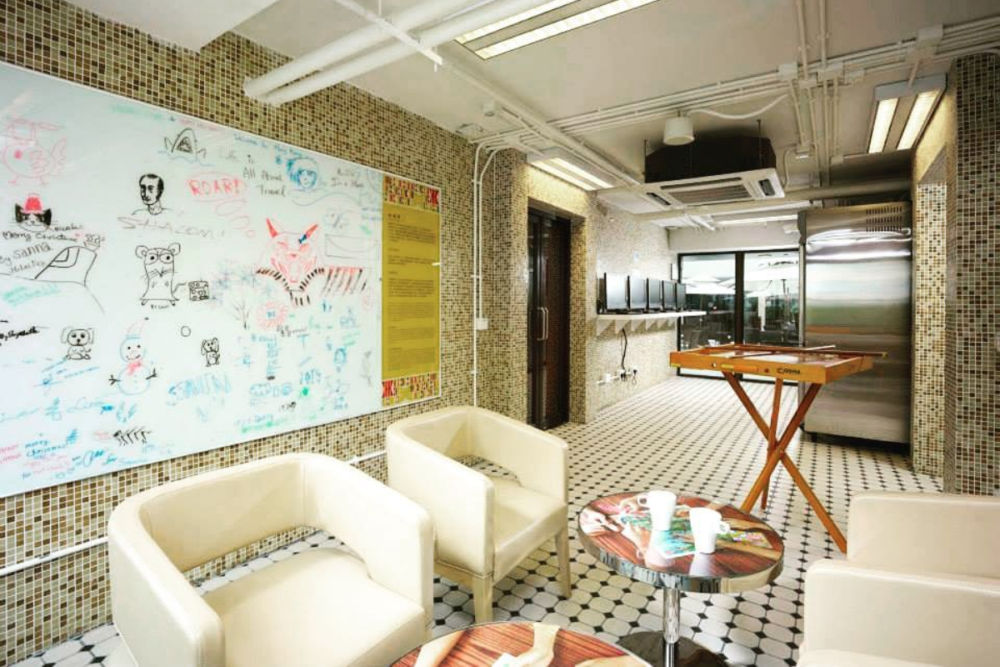 While not quite as fancy as some of the other buildings on this list, Mei Ho House is nonetheless significant in Hong Kong heritage because it is the only remaining building from the original Shek Kip Mei Estate, which arguably pioneered public housing in Hong Kong. This 29-block estate was built in the early 1950s to rehome thousands of people left homeless after the devastating Shek Kip Mei Fire.

As the only part of this old group of apartment blocks that has been preserved, Mei Ho House serves as a record of the developments in Hong Kong public housing. The Hong Kong Youth Hostels Association now operates Mei Ho House Youth Hostel on the premises. The H-shaped building contains 129 rooms renovated from the original apartment units, with nostalgic-themed rooms, a retro-style café, as well as a heritage museum on site. 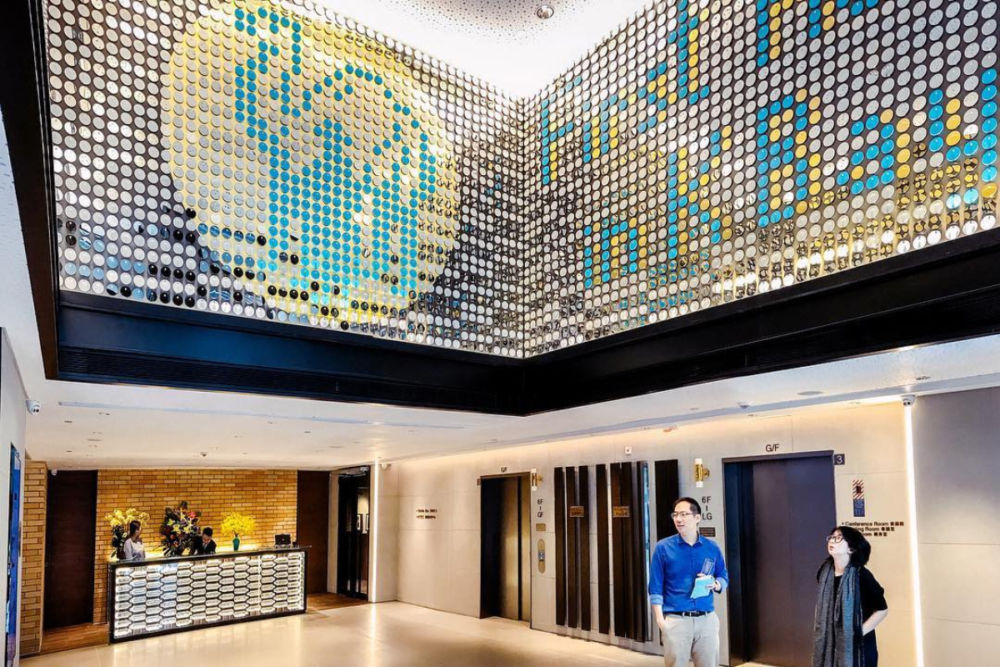 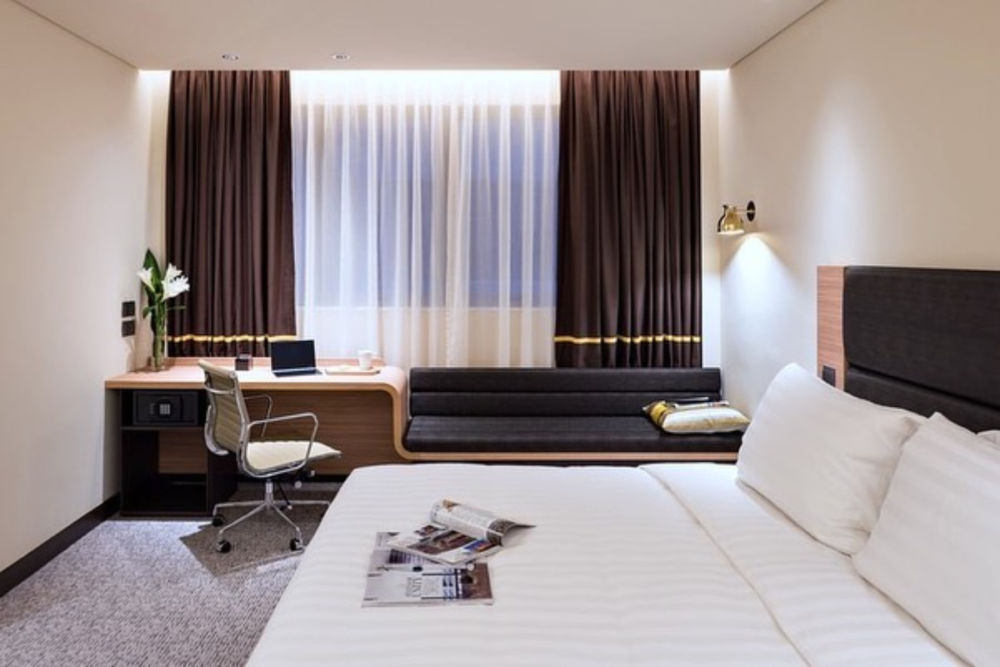 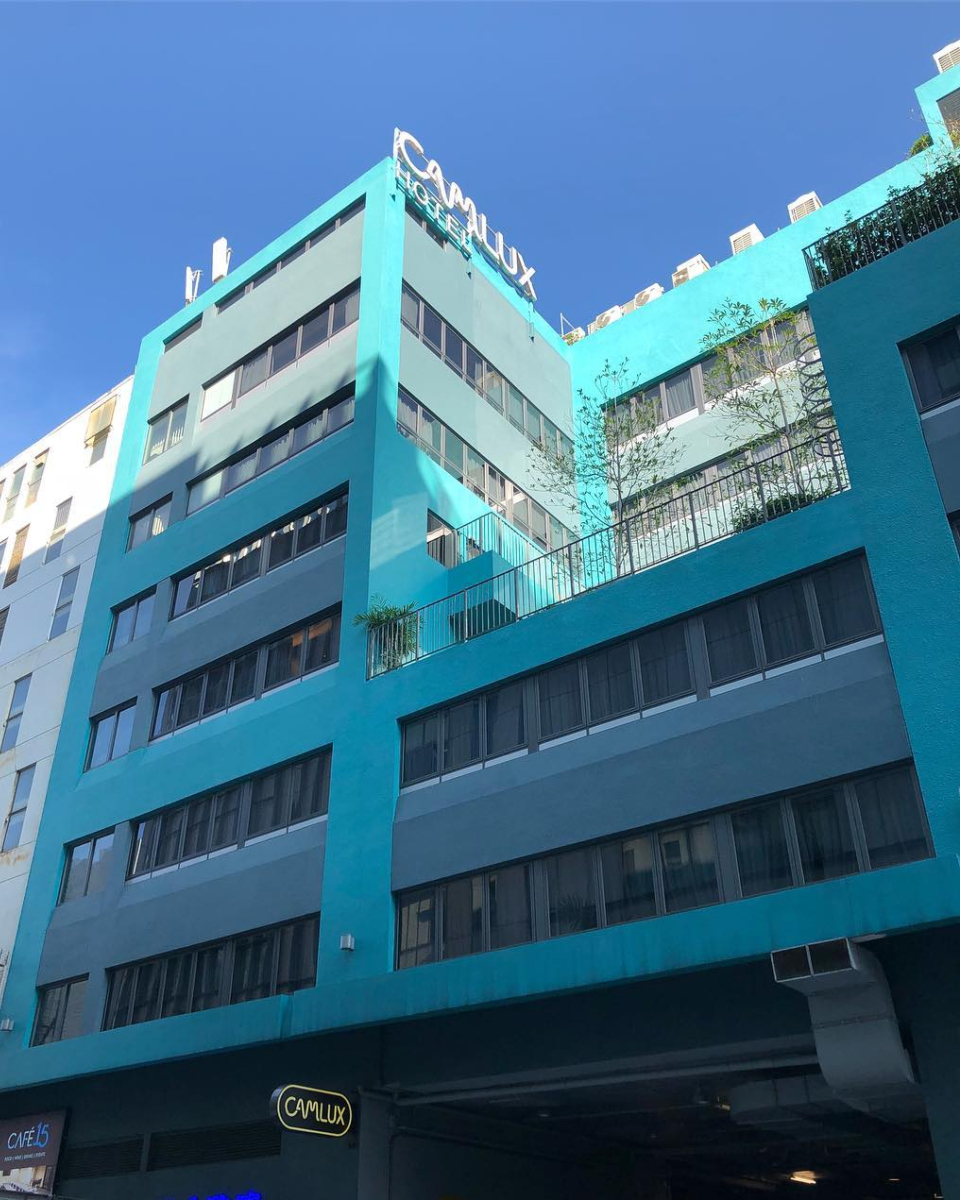 One of the most ubiquitous local brands that still proudly declare their products “Made In Hong Kong” to this day is Camel. Instead of being equated with cigarettes, the brand Camel is known in Hong Kong for their vacuum flasks that have been around since 1940 and remain a popular sight on local kitchen countertops and dining tables to this day due to a resurgence in nostalgia.

The building of the Camlux Hotel used to be Camel’s factory, and they have worked hard to retain parts of its history. The original floor plans remain unchanged, and vintage Camel products have been repurposed throughout the common areas and the 185 rooms—it’s honestly a lot of fun spotting flask parts being used in little details such as lampshades and light covers. This vacuum flask-themed hotel definitely provides a unique look into some local history! 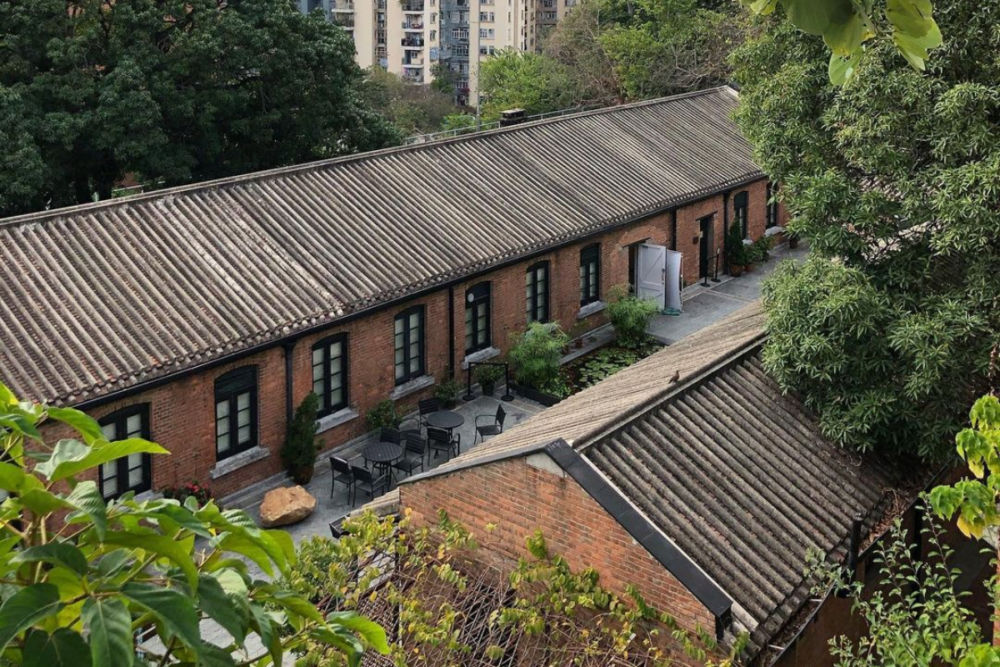 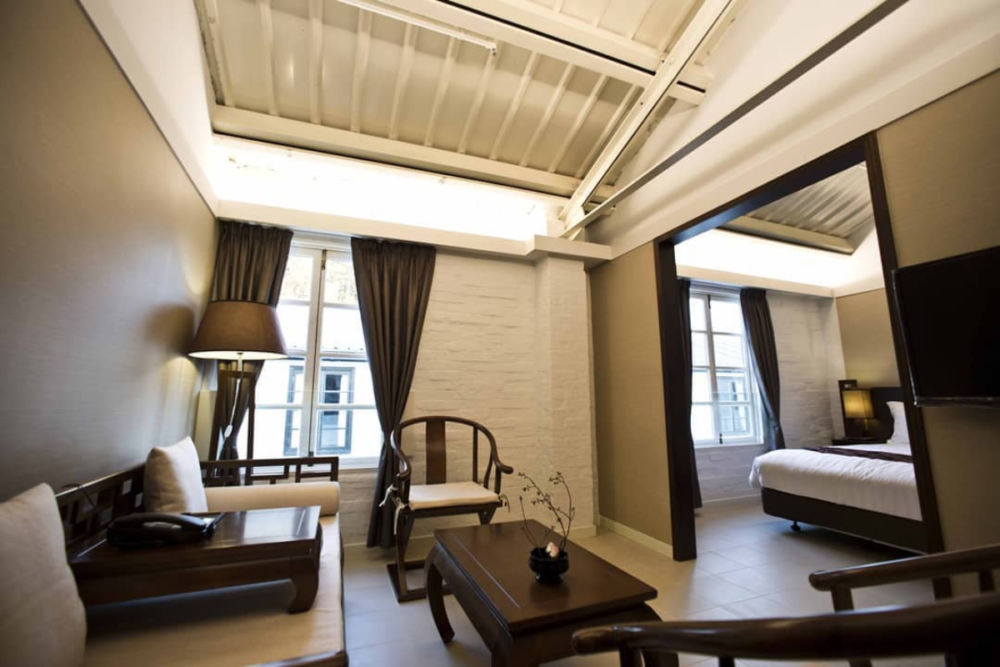 Tucked into a Lai Chi Kok hillside, Heritage Lodge is a part of a cluster of century-old buildings that make up the Jao Tsung-I Academy. Once located near the bay before land reclamation, these structures have served as an infectious disease hospital—one of two in Hong Kong—as well as a prison for minor criminals before Stanley Prison was established. Five of these two-storied, red-brick buildings with pitched roofs—fusing western and local architectural designs—now house 89 guest rooms, including five suites, all furnished in a contemporary Chinese style.

While not outrageously fancy by any means, its guest rooms are comfortable with a distinctly oriental charm and feature the original structures’ high ceilings. The Jao Tsung-I Academy itself is now a cultural centre that fosters community relationships and educates on history through heritage events. 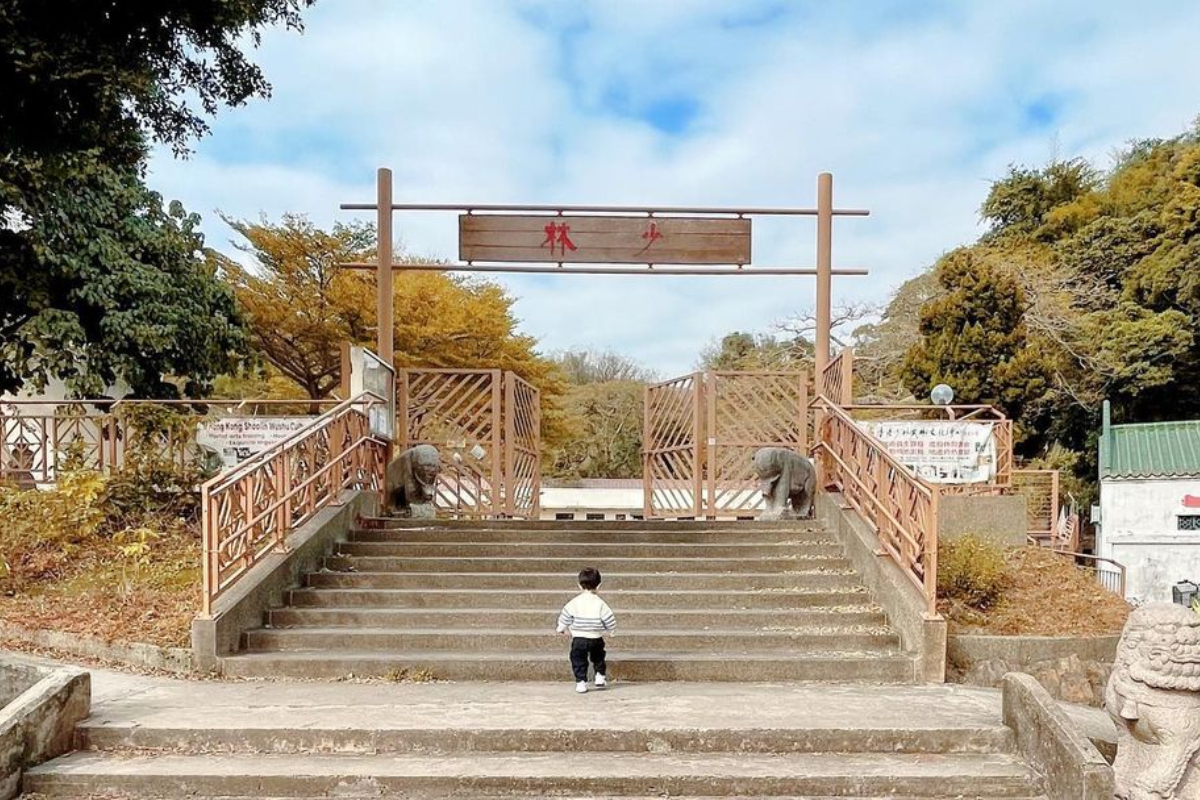 For a retreat of both mind and body, you may want to consider sequestering yourself in the Shaolin Wushu Cultural Centre. Since 2006, the centre has been a space dedicated to teaching the martial arts and philosophy behind the type of wushu (武術) practised in the famous Shaolin Temple in Songshan. Aside from open training grounds and activity halls, the compound also includes five hostel rooms that can accommodate up to 64 guests.

This is one of Hong Kong’s very few places offering short beginner courses from experienced instructors who have been taught at Shaolin themselves. There is also a canteen serving authentic Shaolin-style vegetarian meals, and the Big Buddha, Po Lin Monastery, and other smaller temples are also located nearby for an added dose of spirituality. 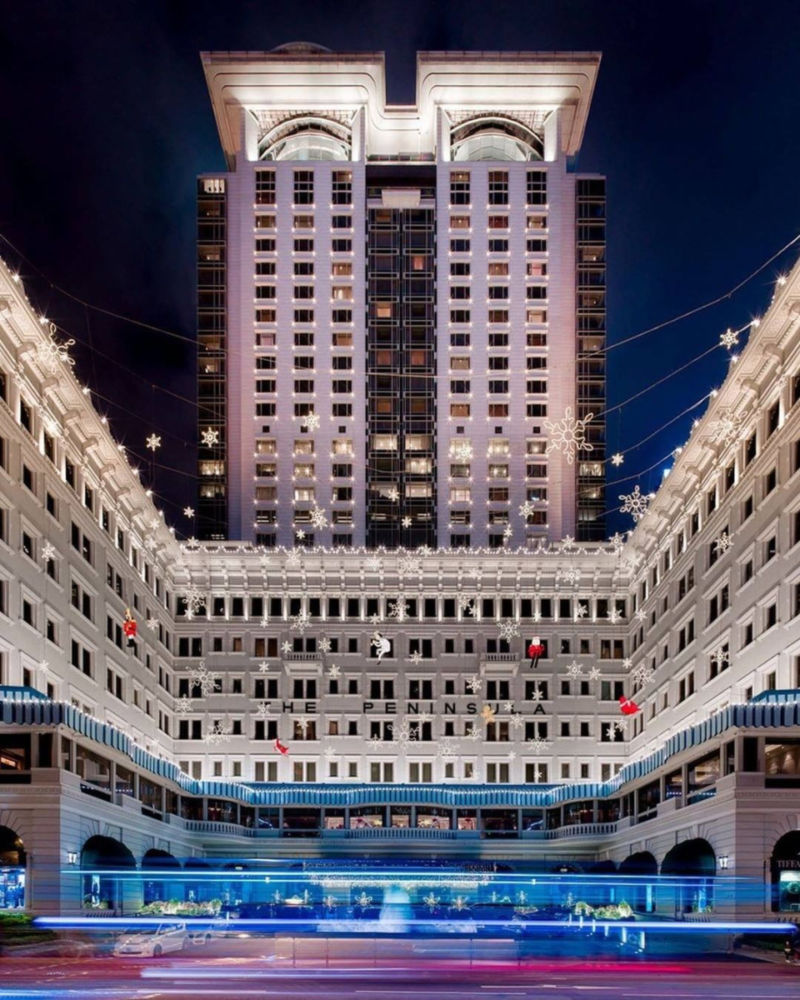 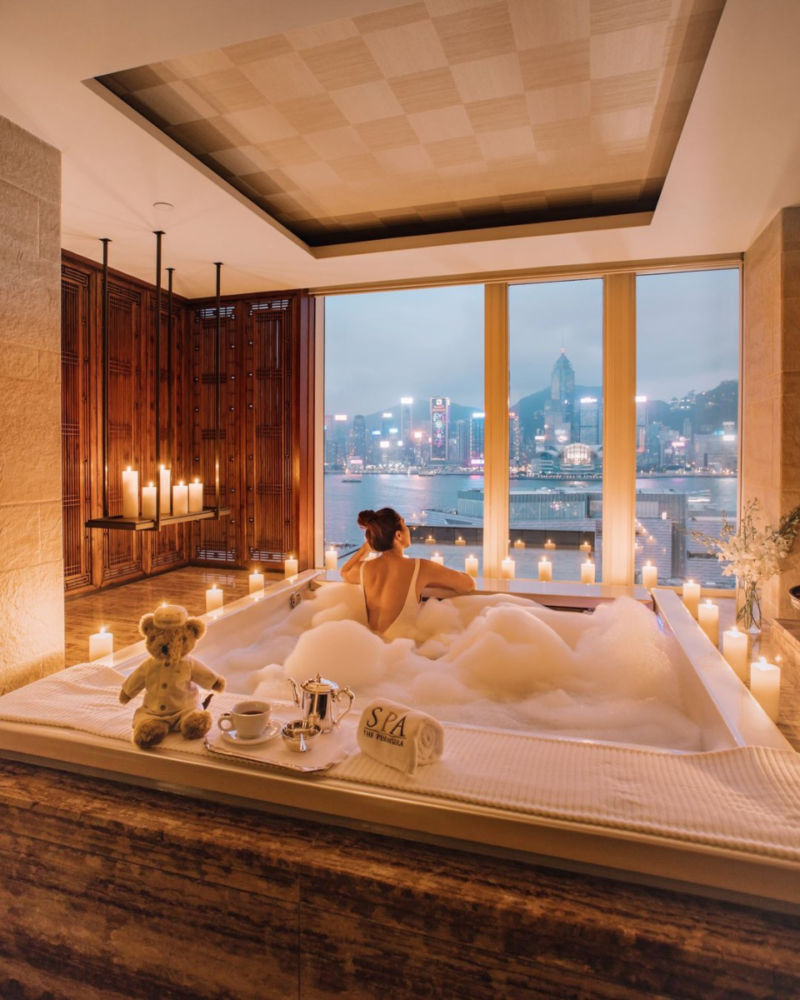 Of course, when discussing hotels housed in heritage colonial buildings, there’s no way we can omit The Peninsula Hong Kong. As the flagship property of The Peninsula Hotels group, it was opened in 1928 to the aim of being “the finest hotel east of Suez”, and indeed enjoyed its status as the place to be seen for Hong Kong’s well-heeled society and celebrities. During World War Two, part of the hotel was commandeered as headquarters for the Japanese militia; the then-Governor of Hong Kong, Sir Mark Aitchison Young, surrendered the territories on the third floor of The Peninsula and was confined in the hotel itself for a couple of months before being imprisoned.

In terms of design, the entire hotel has Baroque architecture and its interiors, with its ornamental stained glass, balustrades, and woodwork draperies, have remained in the same style since 1928. In 1994, the hotel underwent expansion with the addition of a 30-storey tower topped by a helipad. Its 300 rooms and suites are not overly ostentatious, but rather favour a restrained, elegant oriental style, with vintage luggage-inspired accents, cream upholstery, and decorations rooted in Chinese art. Of course, The Peninsula Hong Kong is also famously known for its fleet of 14 Rolls-Royce Phantoms painted in the hotel’s signature green shade. 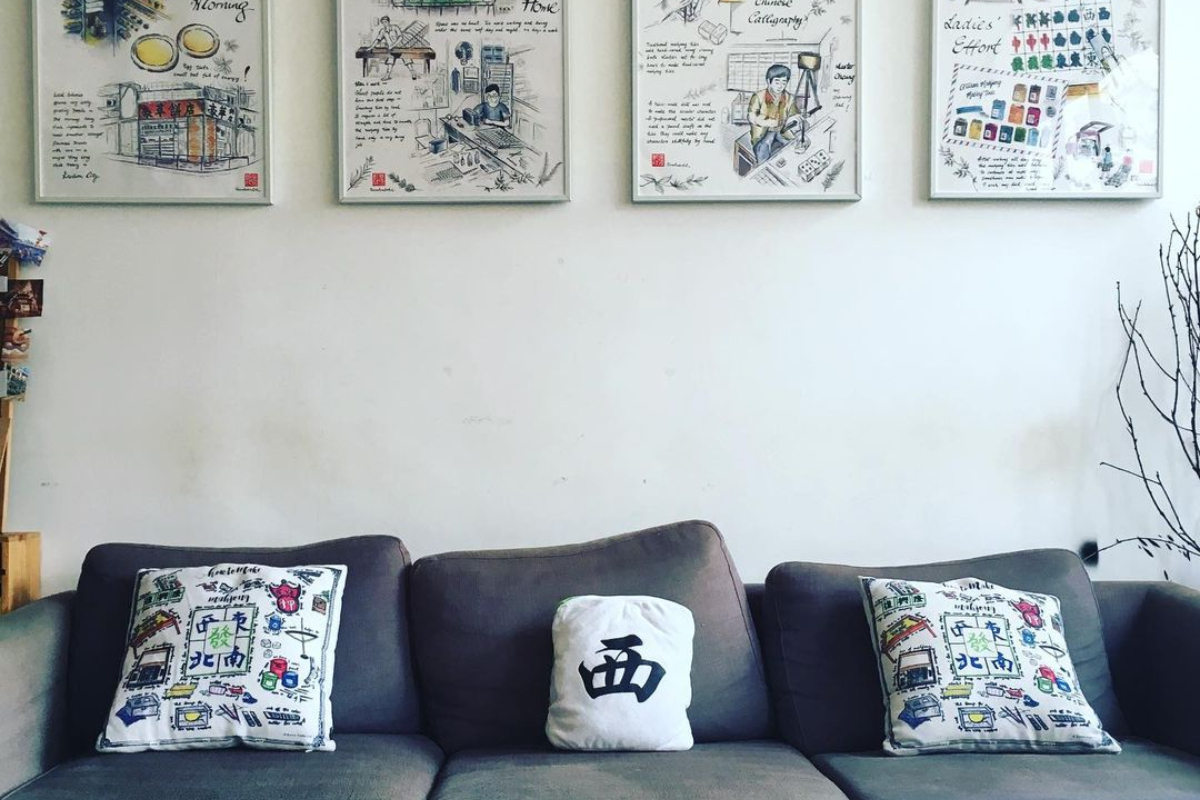 There’s no other social activity that encapsulates the spirit of Hong Kong quite like mahjong; in fact, some might even call it our national pastime, played everywhere from homes and parks to banquets and dedicated mahjong parlours. The folks behind The Mahjong Hostel have taken this traditional game concept and built a unique traveller’s hostel around it.

Aside from custom-built bunk beds, personal lights and charging points, and private security lockers, the hostel also features quirky little design touches throughout the space that are, of course, all mahjong-themed, such as ottomans shaped like mahjong tiles, an actual mahjong set embedded in the wall, mahjong motifs in the wall murals, and even the keycards carry the names of the different rounds of mahjong games. Needless to say, you can sit down for a game or five here with the friendly staff as well!

Bhutan and Nepal: 6 top hotels with a view

Monzen-nakacho, Japan: Explore a quieter side of Tokyo