On a trip to Jakarta, make sure you learn about the vibrant city by getting a taste of its traditional culture and eating its traditional Betawi dishes, a cuisine with distinct Chinese and Malay inflences. Often deemed as the most recently-formed ethnic group in Indonesia, the native Betawi are the descendants of people living in Jakarta, formerly known as Batavia under the Dutch. The origin of Betawi is traced back to the 17th century. During colonial times, people of various ethnic groups across the country and foreign ethnic groups, like Chinese, Indian, Portuguese, and Arabs, were brought to Jakarta to meet labour needs. Now, the melting-pot capital of Jakarta is home to some 10 million people from different cultures, such as Javanese, Balinese, Sundanese, Bugis, among others.

The diversity of Betawi culinary heritage, and its nature of ever-evolving creation, reflects the long history of how the capital city has always welcomed people from different backgrounds who want to get a better life. The rise of modern and new restaurants has made Betawi cuisine take a backseat to popular dishes like Padang’s rendang and Korean bulgogi, but you still can find well-known traditional Betawi cuisine at fine-dining restaurants, budget restaurants or warung, and street vendors at food carts across the city.

If you’re a foodie who’s into strong flavours, don’t waste your opportunity to try out the local and authentic cuisine during your visit to Jakarta. Go strolling around the city and explore its dining scene. Local foods are also only a few taps of an app away—order from local food delivery platforms like AtozGo and GrabFood, and have these tasty dishes delivered in an instant.

Here are some of the popular Betawi dishes that you should definitely try. 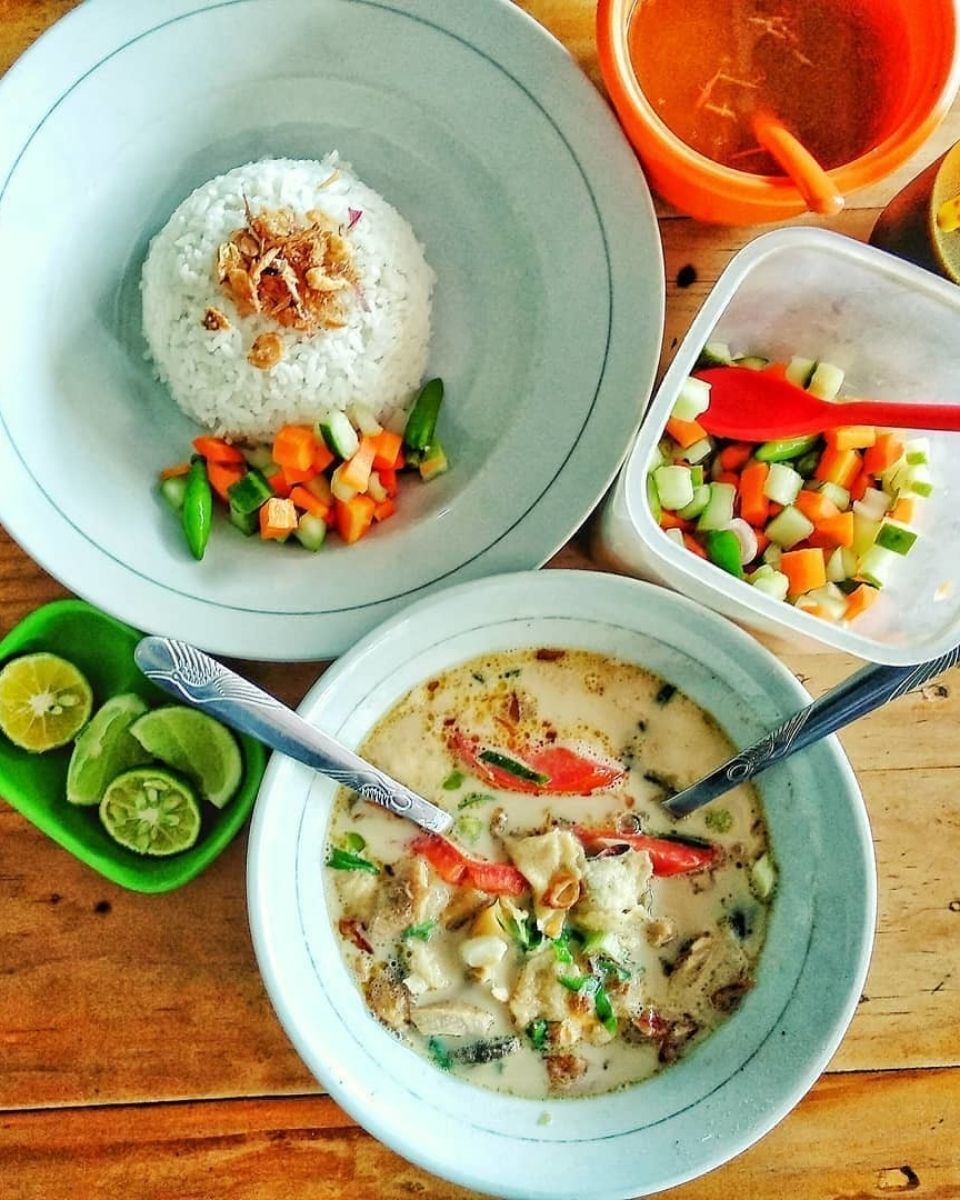 Dubbed as the queen of Betawi dishes, soto betawi is commonly found in Jakarta, from hawkers to upscale restaurants. It is a comforting beef soup and has a thick and creamy broth of coconut milk, herbs, and spices. You can enjoy a bowl of hearty soup with tender beef chunks, but for those who like to have some adventure in their culinary experience, try adding beef offal, such as lungs and tongue. The savoury soup is usually served with white rice or potato cakes and garnished with tomato slices, fried shallots, leek, melinjo crackers, and a squeeze of lime juice. 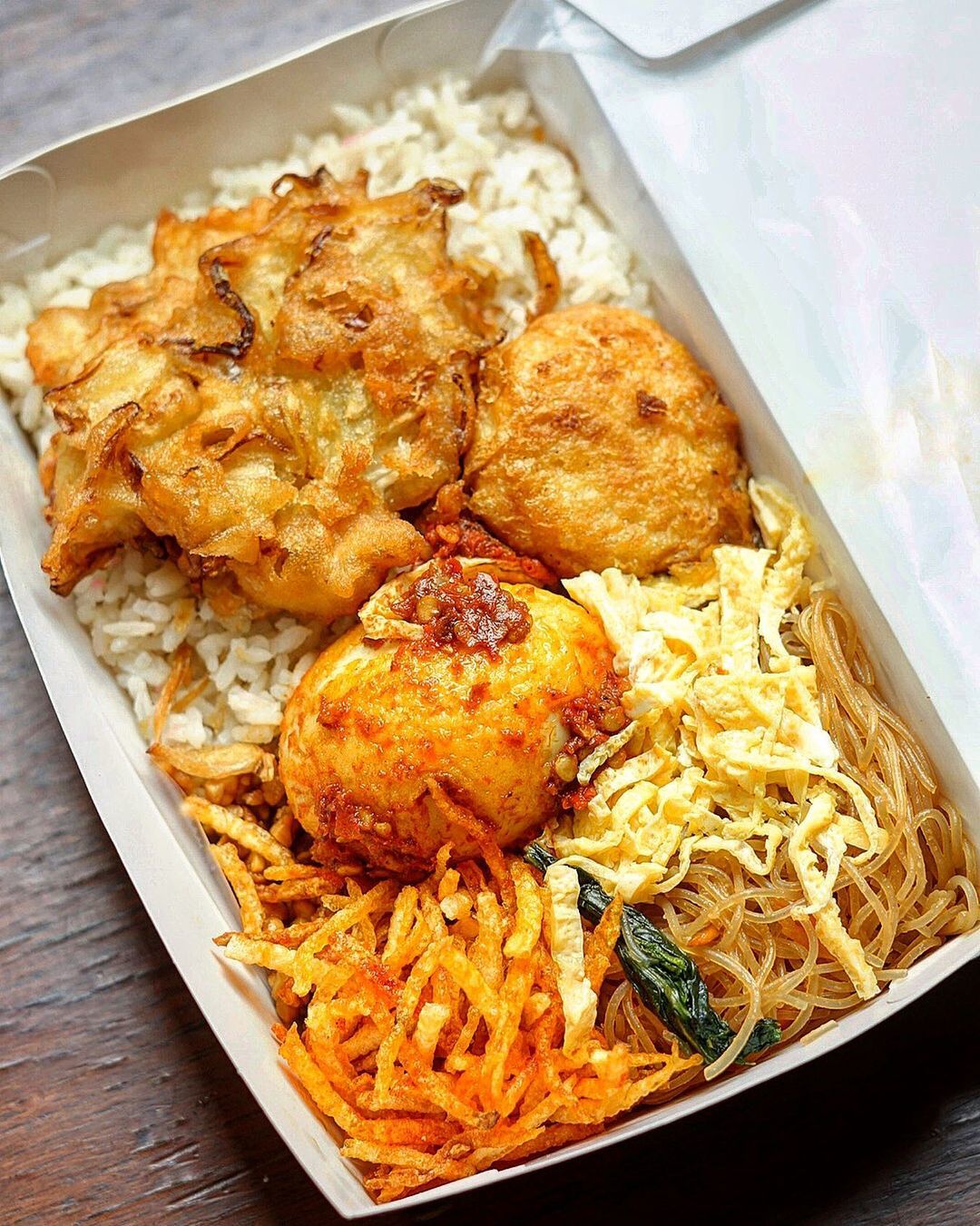 A plate of warm plain rice with side dishes is indeed a filling meal. In Jakarta, take your rice-eating experience to another level with the steamed coconut milk rice dish, locally known as nasi uduk. The rice is cooked in aromatic coconut milk seasoned with lemongrass, cloves, cinnamon, and pandan leaves. Around the fragrant and flavorful rice are side dishes of potatoes with red chilli sauce, tempeh stir fry with soy sauce, thinly-sliced omelette, and vermicelli noodles with crackers and peanut sauce. To make your meal more festive, add even more side dishes like fried chicken, dogfruit (jengkol) stew, a boiled egg, and fresh cucumbers. As the adage goes—the more, the merrier.

Nasi uduk is a cheap meal served in generous portions. A popular breakfast choice, this meal is widely available across the city. It’s worth noting that the locals are used to having a large portion of rice, which might be a little too much for those avoiding a high-calorie breakfast. Don't hesitate to ask for a half or a smaller portion if you don't feel like eating too much rice in the morning.

Jakarta, Indonesia: Where to eat & drink in S... 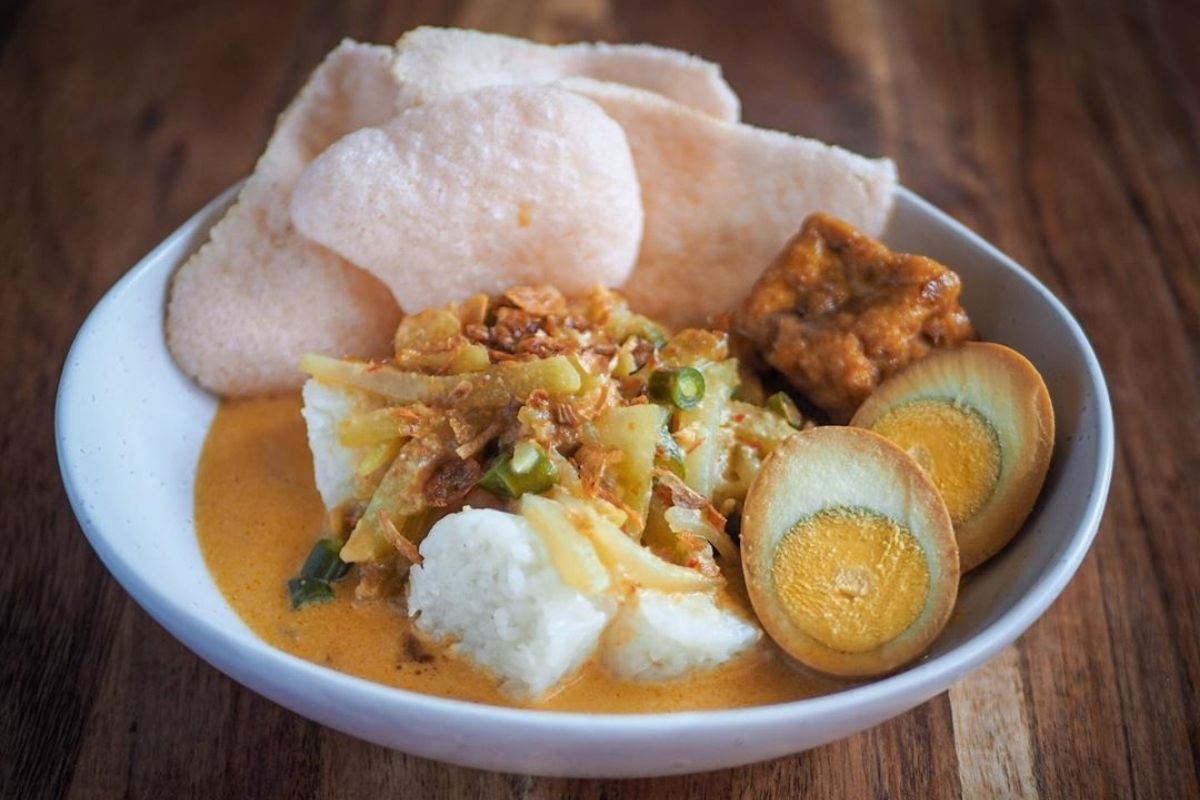 Another popular Betawi dish is ketupat sayur, which literally means rice cake and vegetables. As the name suggests, the dish features firm rice cakes, raw papaya or chayote, and yard-long bean, served in a savoury coconut milk-based soup. The dish is usually garnished with fried onion and crackers, which lends a nice crunch. Just like many traditional foods in Indonesia, the signature Betawi dish has such a sharp aroma and a distinct, spicy flavor thanks to its blend of spices. In case your meal isn’t spicy enough for you, you can ask for the peanut sauce sambal to increase the hotness level. Don’t forget to add a hard-boiled egg, and voila—a hearty, well-balanced dish for your breakfast or brunch. 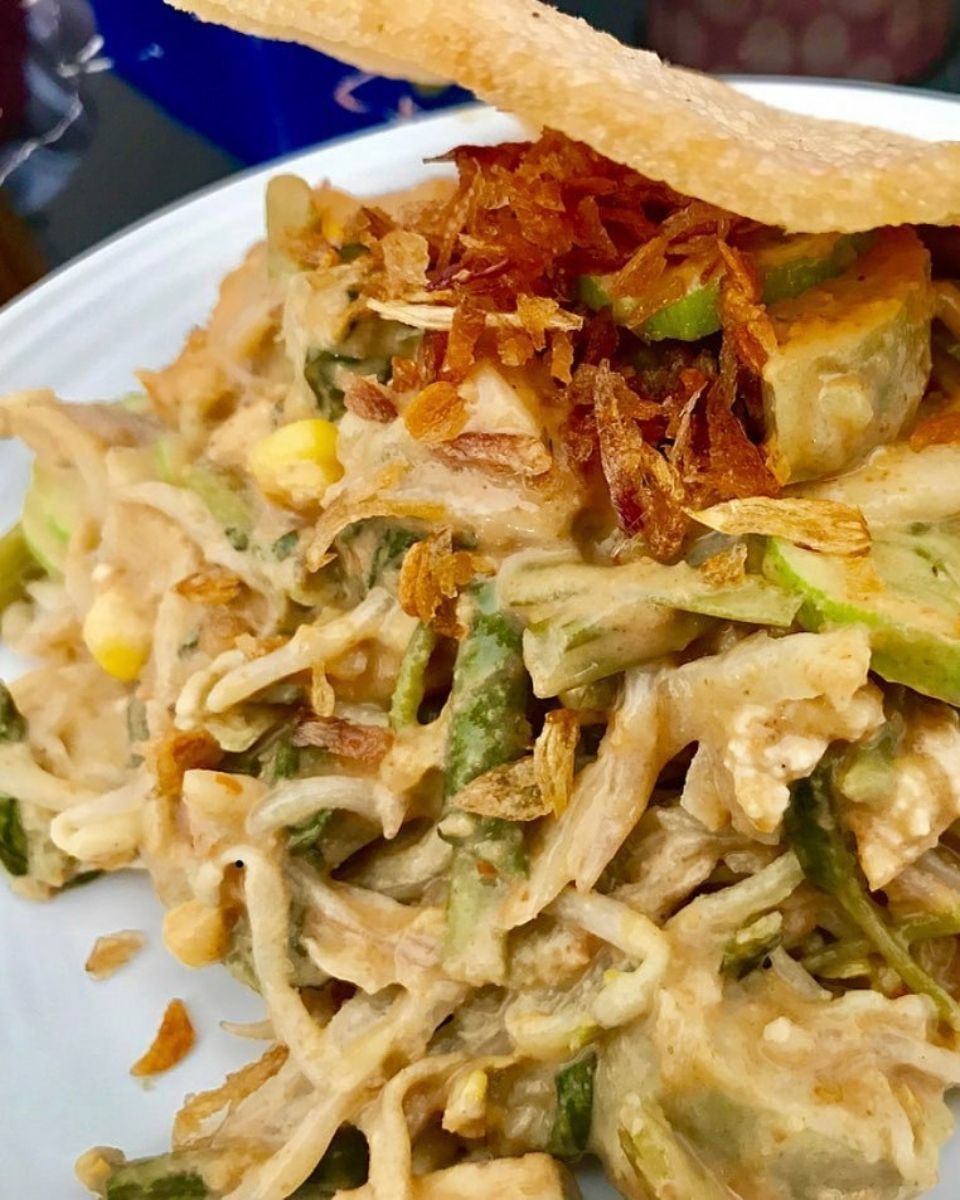 After a few days in the city, you might notice that Jakarta inhabitants have a penchant for fried foods, like the popular geprek chicken (crispy battered fried chicken with hot sambal) and Madura deep-fried spicy duck. Feel like you need some healthier choices? Go for the Betawi-style salad—gado-gado. The humble but colourful dish is served with blanched vegetables, such as potatoes, lettuce, long beans, and cucumbers, tempeh, and a hard-boiled egg, topped with a generous scoop of peanut sauce topping. Some crackers to garnish the dish will add some texture, elevating your eating experience. 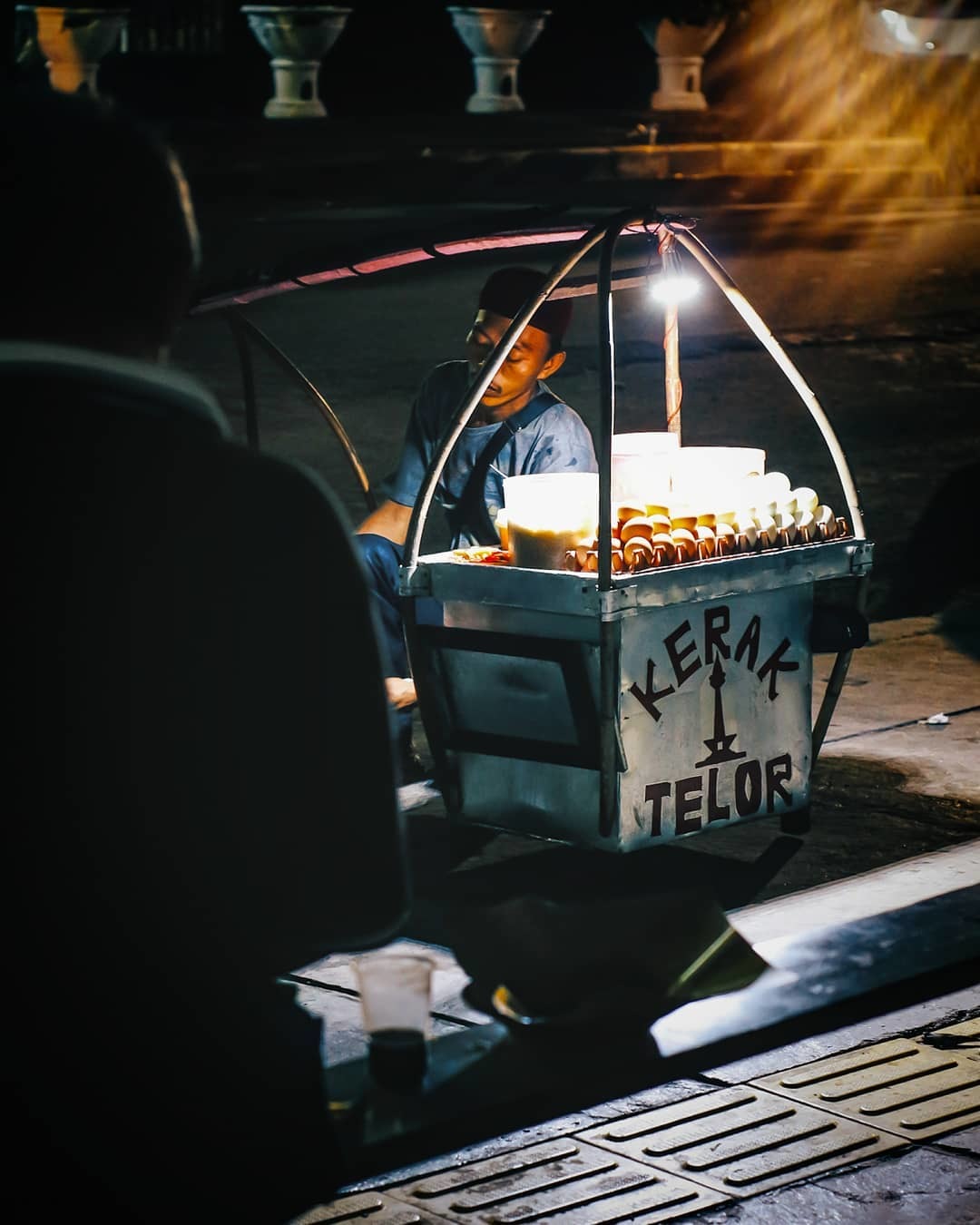 Want to get a filling snack? Grab yourself Betawi’s omelette, kerak telor. It’s spicy and rich in both flavor and scent. Duck eggs are a popular ingredient choice for creating this traditional dish, as are chicken eggs. Sticky rice is cooked on a pan, mixed with an egg, fried shredded coconut, and dried shrimp. The seller will let the omelette sit untouched throughout the cooking process, but nearing the end, the pan will be flipped, allowing the direct heat from the glowing charcoals to cook the top side of the omelette. The aromatic meal is then tossed with more dried shrimp, fried grated coconuts, and fried shallots. Enjoy the satisfying snack while it’s still warm to taste the best of its golden-brown crust on both sides. Once you take a bite, you’ll notice that it’s chewy inside.

Unfortunately, kerak telor is not as ubiquitous as previous dishes. But you can easily spot this iconic dish near attractions, like the National Monument (Monas) and Ragunan Zoo, or at big events like the annual Jakarta Fair. 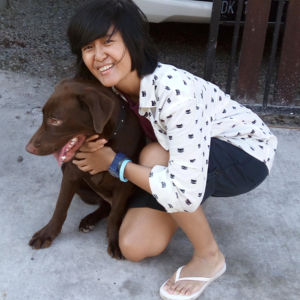 Shenny is a freelance writer/journalist/translator who can write both in English and her mother tongue Indonesian. She loves backpacking to lesser-known destinations, especially those with a comfortably cold climate. An avid history fan, she enjoys spending hours at museums while others might yawn and try to find the nearest exit.

Kyoto, Japan: A day trip to the former imperial capital